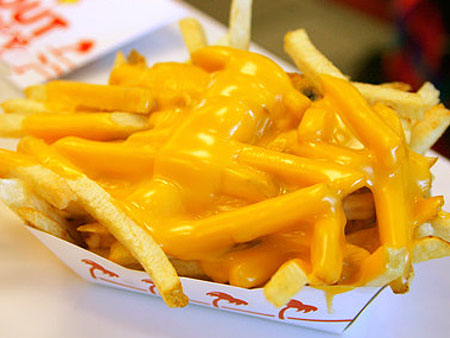 It’s one of the weirdest stories we’ve reported all year. And things just went from bad to really bad for the man charged with robbing a bowling alley of cheese fries at gunpoint.

And the allegations against Harney are remarkably simple. In court filings, prosecutors simply allege that he

“knowingly took property cheese fries from the victim/presence of the victim, Waveland Bowl/[NAME WITHHELD] by use and/or threatening the imminent use of force while carrying or being armed with a handgun.”

Following up on another story we told you about recently, prosecutors have filed burglary charges against a 24-year-old man whose Cook County Jail release papers were found on-board a burglarized boat in Diversey Harbor.

The boat’s owner returned to town early June 5 and found that someone had been living in his watercraft for several days.

“He has been cooking. He has been sleeping with a girl in my bed. He has taken anything and everything,” the owner told the Chicago Tribune. “This guy is pretty bold.”

Terry L. Mikkelson Jr was supposed to be on electronic monitoring at the time of the boat escapade, court records show. Sheriff’s deputies tracked him to a North Side no-tell motel on June 9.

He’s being held without bail as he awaits a July court appearance.

Mikkelson is facing another count of burglary in connection with a Lakeview theft last month as well as escape charges. He alternately lists the Howard Brown Health Center on Sheridan and The Crib youth shelter in Boystown as his home addresses.

Images: Cook County Sheriff’s Department
———-
Email us.  Facebook us. Twitter us.
About CWBChicago 4360 Articles
CWBChicago was created in 2013 by five residents of Wrigleyville and Boystown who had grown disheartened with inaccurate information that was being provided at local Community Policing (CAPS) meetings. Our coverage area has expanded since then to cover Lincoln Park, River North, The Loop, Uptown, and other North Side Areas. But our mission remains unchanged: To provide original public safety reporting with better context and greater detail than mainstream media outlets.
Website Facebook Twitter YouTube