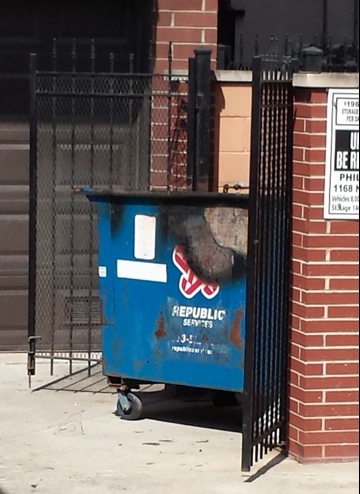 UPDATE: Arson investigators took a suspect into custody at the Center On Halsted Wednesday afternoon.
——
CWB has confirmed that Chicago police are seeking a known suspect for questioning in at least one arson fire near the Belmont Red Line station.

Investigators are looking into a fire that they believe was intentionally set in a dumpster behind condo buildings at 3221 N. Sheffield at 3:45 yesterday morning (Seen here in first photo).

Surveillance footage has allowed officers to identify a suspect who is known to cops in the 19th district.

He is described as a black man, about 25-year-old with a distinctive high-cut Afro. He was last seen panhandling this morning near School and Sheffield—less than a block from the suspect fire. He was wearing a blue denim vest over a tie dye shirt, faded blue jeans, and gray gym shoes. 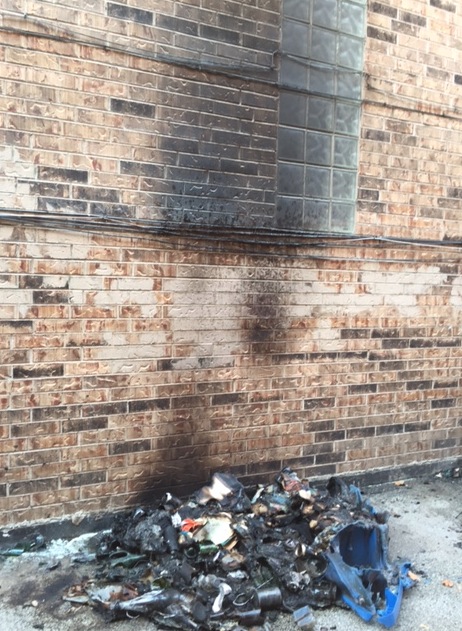 Yesterday afternoon, a witness reported “a flower pot or something” on fire behind a building in the 800 block of Addison. It was quickly extinguished.

And a CWB Chicago reader this week submitted photos of a trash receptacle that he found burned out near a home in the 800 block of Fletcher. (Seen in second photo.)

Early on June 25, a surveillance camera captured images of two men setting a trash can on fire in the 3000 block of Sheffield. That fire spread to two nearby coach houses. All of the occupants escaped, but their homes were heavily damaged.

It is not yet known if there is any connection to the man currently being sought.

Meanwhile, two sets of suspicious fires in the North Center neighborhood are raising some eyebrows.

On Monday, two trash fires were reported in alleys at Claremont and Belle Plaine and in the 2400 block of Warner between 5:30 and 6PM.

In the same neighborhood last Thursday, a rubbish fire was reported in the 3900 block of Oakley at 3:35PM followed 20 minutes later by a garbage can fire in the 2000 block of Warner.