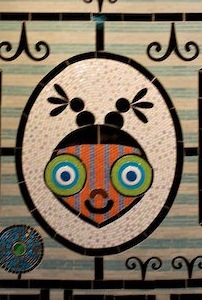 Updated 12:59PM
—————–
A man was stabbed in the face during an altercation early this morning outside of the Belmont Red Line station’s south entrance, 945 W. Belmont, police said. No one is in custody.

The victim was able to flee the scene and called for assistance from the 3100 block of Sheffield at 1:45AM.

The victim was transported to Illinois Masonic Medical Center in good condition.

DNA Info Chicago this afternoon reports that the offender is a female acquaintance of the 21-year-old victim.

Probably not coincidentally, passers-by reported seeing a woman flipping a switchblade as she walked near Addison and Broadway around 5 o’clock this morning. Police were unable to locate the woman.

• At 3 o’clock this morning, a man reported that he had been grazed by scissors in an attempted stabbing at the Wrigleyville Taco Bell restaurant, 1111 W. Addison. He declined medical attention. The offender was last seen walking toward the Addison Red Line station, witnesses said.