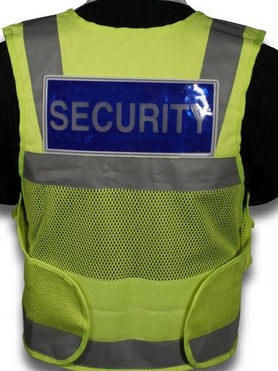 A security company that provides private patrols in Boystown is “reviewing its hiring process,” Northalsted Business Alliance Executive Director Christopher Barrett Politan said, after one of its guards was found to have pleaded guilty to impersonating a police officer in November 2000.

The guard, Ronald J. Lye, and a co-worker were accused in 1999 of taking people’s money while posing as police officers in Kane County, according to a news account on his defense attorney’s website.

Lye later pleaded guilty to impersonating a police officer and illegal use of a flashing blue light. Other charges, including armed robbery and armed violence, were dropped according to the attorney’s news account. Court records show he has faced no criminal charges in Kane or Cook counties since his 1999 arrest.

A suburban newspaper’s contemporaneous report said that one of the alleged Kane County victims was an underage man from out-of-state who was caught drinking. The Beacon News, citing police reports, said that the victim had been handcuffed and was told that he would be released in exchange for $100.

An adult who was accused by the cop impersonators of buying the 20-year-old’s beer also paid a “fine” to the guards, the paper reported.

Both men’s state certifications—so-called “PERC” cards—have been in revoked status since 2002, when regulators determined that they had failed to inform the state of work-related criminal indictments.

Lye, who has been working as Halsted Street security, is reportedly in the process of seeking reinstatement of his PERC card. He has declined to speak with us on the record.

“While [Lye] awaits the reissue of his PERC card, he is not currently on the schedule for security services,” Northalsted’s Politan said.

Applicants who seek security work while their PERC applications are pending must provide potential employers with a statement that detail all criminal convictions. They are also required to submit results of a fingerprint-based background check.

Politan declined to name the security contractor involved or to say how long the guard had been working on Halsted’s private patrol.

But, Politan said, “the firm remains in excellent standing with the Northalsted Business Alliance and there is no reason to believe that any of our safety initiatives have been compromised.  We remain confident in the firm’s ability to handle security services.”

CWB Chicago has exchanged emails with the owner of Walsh Security, whose officers are frequently seen patrolling Halsted Street. He has not, however, offered answers to our inquiries.

The Windy City Times reported in 2012 that Walsh Security had been operating as a contractor for the Center on Halsted without a state-mandated license.  The firm is currently licensed, records show.

A Struggle On Halsted

Lye’s employment came to light after Chicago police referred to him as “Halsted Street security” in a recent incident report.

According to police, Lye was battered by an unruly patron who refused to leave D.S. Tequila Company, 3352 N. Halsted, at 1:20AM on July 12.

Police said the offender—who also faces a pending charge of resisting police in Cicero—struggled with Lye and suffered a cut to his hand as he and Lye fell into the bar’s front window.

The offender is charged with battery and criminal trespass.