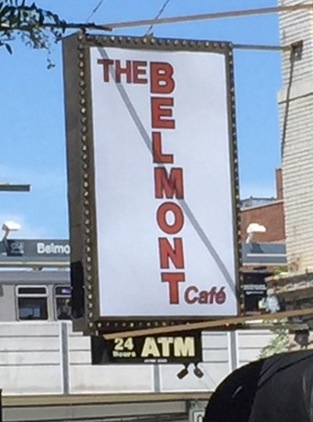 Well, he won’t do that again.

A delivery driver who unwisely left the keys in his car while he dropped off items at the newly-opened Belmont Cafe, 930 W. Belmont, is now in the market for a new vehicle.

The driver told police that he left the car running on “Helmont” for just a brief second at 1:30 Tuesday morning.  But that was enough time for one of the local opportunists to strike.

Police say an unknown person jumped into the black 1999 Toyota Camry  and sped away westbound on Belmont. The vehicle, which has a plate that begins with V757, has a broken rear bumper.

Image: The Belmont Cafe sign at Belmont and Wilton via DNAInfo Chicago.