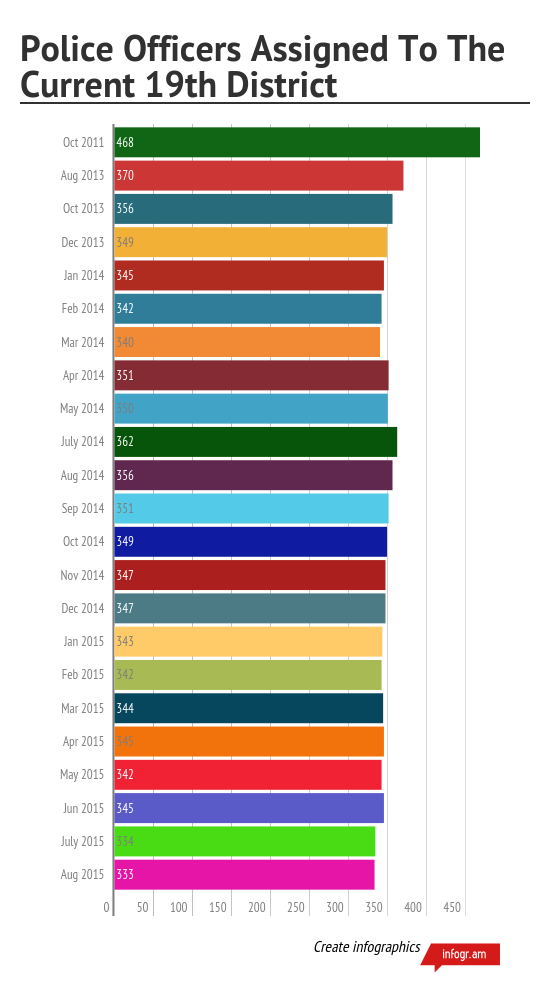 While a local alderman publicly states that the Chicago Police Department is increasing the “resources” dedicated to our area in light of a robbery and burglary spree, new information provided by the department directly shows that the 19th police district’s manpower has actually reached a record low this month.

A police manpower document, secured through a CWB Chicago reader’s Freedom of Information Act request, shows that 333 police officers are currently assigned to our area.

The current staffing off 333 assigned cops is down 23 officers from the same time last August and is down 37 cops compared to August 2013.

Before two smaller districts were merged to form the 19th district in March 2012, the same area was patrolled by 468 officers.
In announcing plans for the merger, local politicians and city police leadership assured residents that police resources would not be cut in the 19th and 23rd districts’ consolidation.
The department allowed a small number of police officers to transfer into our area leading up to the 2015 municipal elections. But that well went dry quickly and district manpower now sits at an all-time low.
—–
Want to support CWB’s efforts? Visit our company store for “Helmont” CTA-themed shirts, advertising opportunities, and our much-appreciated Tip Jar.
About CWBChicago 4360 Articles
CWBChicago was created in 2013 by five residents of Wrigleyville and Boystown who had grown disheartened with inaccurate information that was being provided at local Community Policing (CAPS) meetings. Our coverage area has expanded since then to cover Lincoln Park, River North, The Loop, Uptown, and other North Side Areas. But our mission remains unchanged: To provide original public safety reporting with better context and greater detail than mainstream media outlets.
Website Facebook Twitter YouTube