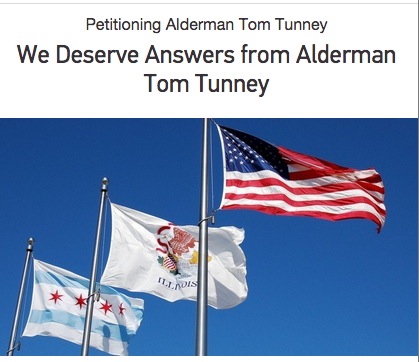 Boystown resident Ted Rosinus still hasn’t received a response from Alderman Tom Tunney’s office to a September 10th letter about crime and policing in our neighborhood.

Here’s a quick link to his petition.

“By signing this petition I will add your name to the next letter I send Tunney that will reiterate previous questions concerning his strategy to reduce violence and crime in Lakeview,” Rosinus says.

“At the end of the day, he’s our advocate with the powers-that-be…It is his responsibility to channel our feelings and seek to find answers and implement policies that address what are often very legitimate concerns, anxieties, questions, and so on.”

Five days after hand-delivering his letter to the alderman’s office on September 10, Rosinus emailed a copy to Tunney’s chief of staff.

“I received a two sentence reply that he would work with the Alderman to ‘prepare a response.'” Rosinus never heard back.

He sent a follow-up letter to Tunney last Wednesday and then forwarded that letter in an email to the chief of staff the following day.

“Again, nothing,” Rosinus says. “No response. No acknowledgement.”

With the revelation that Tunney has recently resorted to hiding Facebook comments that are critical of his response to crime complaints, the alderman’s unwillingness to simply reply to a constituent’s concerns seems particularly troubling.

Take a minute to join Rosinus’ efforts by co-signing HERE.