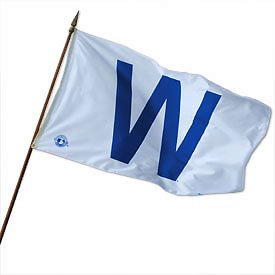 UPDATE 9:34PM: We were a little light with our estimate of 7 arrests. Chicago police late Thursday pegged the arrest tally at 9.
———–
The Cubs beat the Pittsburgh Pirates last night to enter the playoffs. And the Wrigleyville victory celebration was almost quaint compared to some of our neighborhood’s more typical disasters.

Only seven people found themselves jailed during last night’s festivities—on pace with the number of arrests at last year’s Twelve Bars of Christmas bar crawl.

Of course, last night was just the beginning of what could be a long journey for the Cubs. Keep those flex cuffs handy, officers.

9:37PM — First arrest of the night. Clark and Eddy. Maybe they’ll have the game on in jail.

10:19PM — Security is fighting with a customer at Sports World. He wants the customer arrested. Clark and Addison.

10:24PM — “The radio station employees are encouraging people to jump off the cars” at Barleycorn.

10:48PM — Margaret says a blimp is coming too close to her building and “she wants police to call the blimp people and make the blimp move.” Cornelia and Southport.

10:51PM — Battery victim down and bleeding in the alley behind Redmond’s. Clark and Roscoe. Ambulance rolling.

10:53PM — “Streets & San says they won’t be coming for about an hour because there are too many people on the street.” What’s their location? “They aren’t here.” Where are they? “They haven’t come yet.” Have ’em come right away or we’re just going to open the streets.

10:55PM — A white man in a Cubs hat and blue t-shirt is jumping on Hassan’s car at Clark and Newport.

10:57PM — “The helicopters have been hovering over her house for an hour!” Racine & Wellington.

11:01PM — Battery in progress. Man beating up another man inside the gas station. 801 Addison.

11:02PM — “I got flagged down at the gas station.” The offender is gone, but “the guy’s laying on the floor bleeding. You might want to send EMS.” Offender fled southbound on Halsted.

11:10PM — Foot pursuit! In custody. 37XX Sheffield in the alley. Two arrests for hitting a man over the head with a bottle. EMS transports the victim to Illinois Masonic.

12:33AM — CTA reports a “group of males destroying public property with bats” at Clark and School. One man stopped for questioning. Record check finds him to be “a Satan Disciple and registered child sex offender, but otherwise, he’s clear.” No arrest.