The Chicago City Council held its annual police “budget hearing” on Tuesday. It’s really more of a 5-minute grandstanding session for each of the city’s aldermen to get some good soundbites in.

Anywho, since it’s in the news this morning, here are a couple of thoughts and, then, some journalists’ live Tweets of local alderman Tom Tunney’s interactions.

Ald. Tom Tunney (44th) charged that the merged Town Hall District went from 468 officers in earlier years to 333 in August and said that made it hard to support a budget with a record $600 million increase in property taxes. He said his Lakeview area was beset by robberies and burglaries “where people see opportunities.”

McCarthy blamed the drop on senior officers who seek assignments at Town Hall and then retire, adding he’d work to “get that back in balance.”

First, our district is not losing huge swaths of officers due to retirements. The vast majority are lost because our cops transfer to other districts and then McCarthy does not allow them to be replaced.

Here’s a citation for our statements from DNAInfo Chicago:

“The district also lost officers [in 2013] after 14 transfers and two retirements.”

Regarding Tunney’s statement that voting for the tax hike would be difficult….

We will be floored—and I mean knocked to the floor in a state of catatonic shock—if Alderman Tunney votes against the property tax hike.

The alderman often frames his unpopular votes and positions as having been “hard” or “difficult.” We don’t expect the spots on the leopard to change anytime soon.

In response to Tunney, McCarthy said, “I apologize. We’ll get back to [staffing the 19th district]. We’ll get it fixed.”

That’s coming from the guy who promised us that those cops wouldn’t leave in the first place. This is McCarthy regarding staffing here in 2011 (when we had 30% more cops):

“I’m not willing to push down on a balloon. I don’t want to push down here and have it pop up here. So our commitment is to keeping the cops where they are.”

And why should we believe today that he will “get it fixed?” 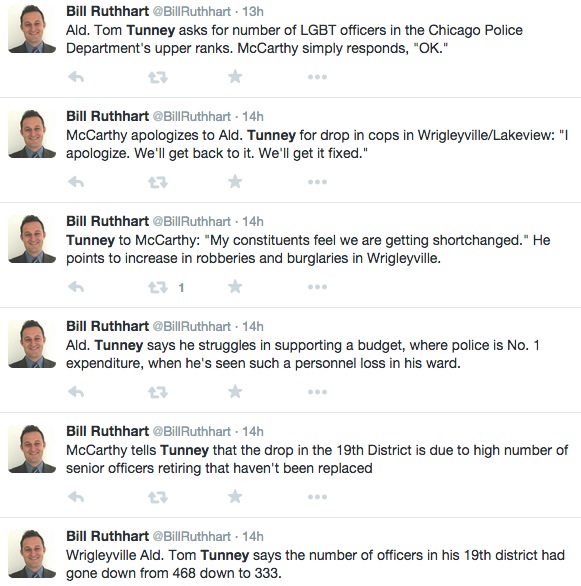 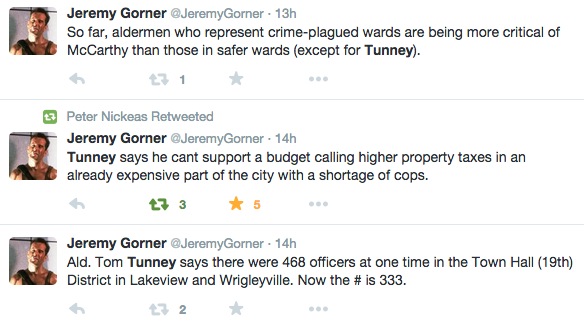