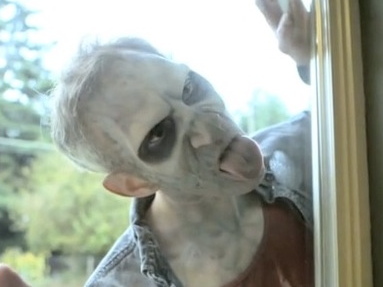 The creepy, curious hands were not able to grab anything during the incident, which was reported at 9 o’clock Thursday night in the 3300 block of Lakewood.

But, a man who lives in the 600 block of W. Surf was not so lucky earlier in the day.

That victim found an unknown person in his apartment at 3:10AM and chased the offender out the back door. A computer was stolen in the forced-entry burglary, police said.

Other notables in the burglary bonanza:

• A newly-opened eyeglass and contact store in the 3100 block of N. Broadway had its front door kicked in by a smash-and-grab burglar early Monday. Video shows an apparently professional burglar at work as he donned gloves and a hoodie and spent less than 30 seconds on-scene.

• A .40-caliber Glock handgun and 100 rounds of ammunition were among the items taken during a forced-entry burglary in the 800 block of W. Roscoe on October 13.

• A complex of medical offices in the 2800 block of N. Sheffield has been the scene of several burglaries this month. Workers returning to their offices on Monday found three offices on three separate floors burglarized there. Another office was broken into in the same building on October 17. And yet another was burglarized on October 2.

• A resident of the 700 block of Buckingham told police that an unknown man walked into her apartment at 3:45PM on October 21 and then fled when she confronted him.

• A burglar targeted an occupied home in the 1200 block of W Grace while residents slept on October 22.

Other recently-reported burglaries in our area: