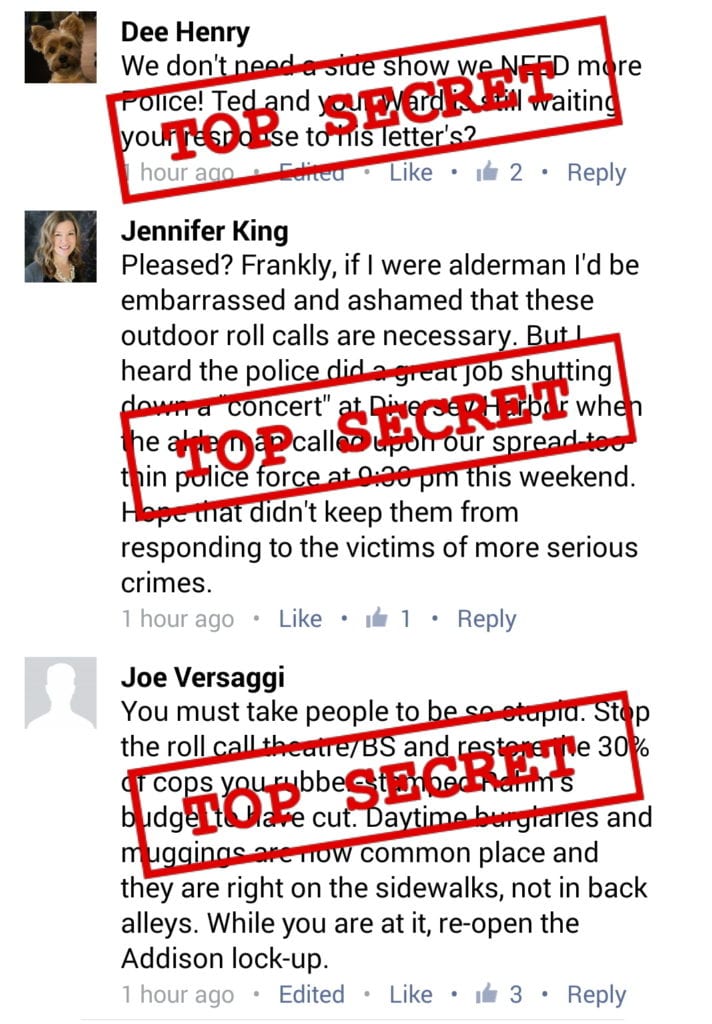 A new low was reached Wednesday in local alderman Tom Tunney’s refusal to engage neighbors in an open conversation about crime and policing.

Don’t worry. We archived screenshots of the deleted comments before Alderman Tunney went into “hiding” mode.

Gone But Not Forgotten 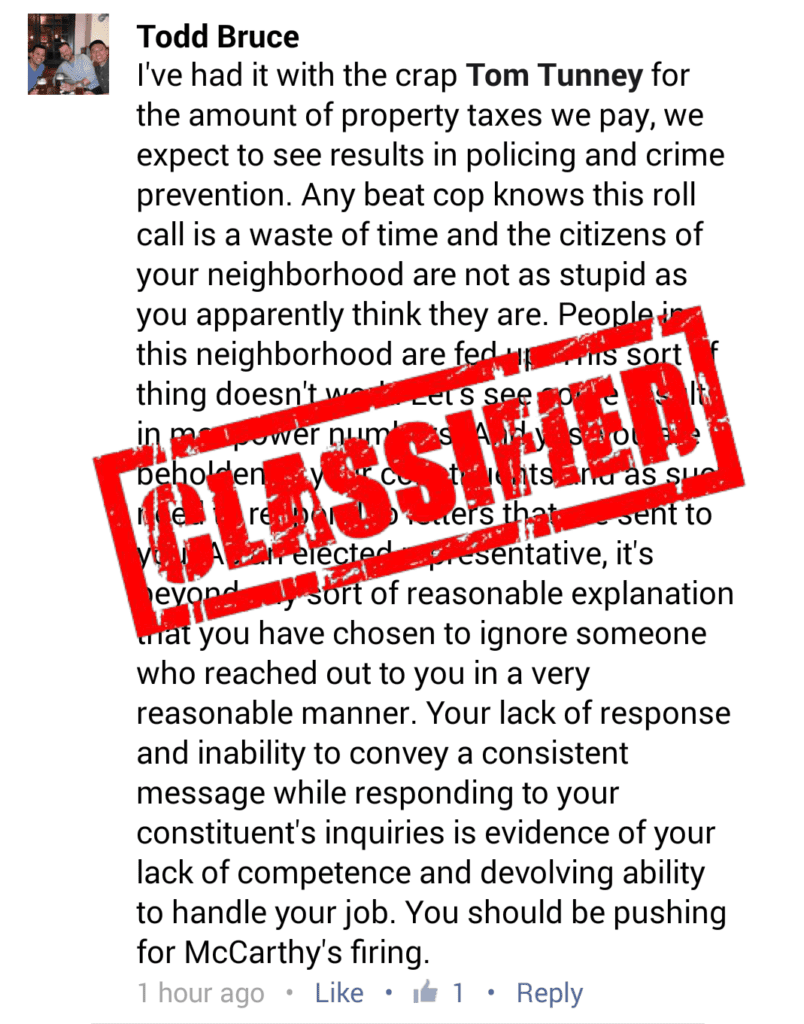 “Pleased” to announce another series of public police gatherings on Tuesday, Tunney posted to Facebook

By noon Wednesday, he had removed all responses to his post.

“We don’t need a side show we NEED more Police! Ted and your Ward is still waiting your response to his letters,” said Dee Henry in a comment that earned two likes before Tunney removed it.

“Pleased?” asked Jennifer King. “Frankly, if I were alderman I’d be embarrassed and ashamed that these outdoor roll calls are necessary. But I heard the police did a great job shutting down a ‘concert’ at Diversey Harbor when the alderman called upon our spread-too-thin police force at 9:30 pm this weekend. Hope that didn’t keep them from responding to the victims of more serious crimes.”

Joe Versaggi had some thoughts on the outdoor roll calls, too: “You must take people to be so stupid. Stop the roll call theater/BS and restore the 30% of cops you rubber-stamped Rahm’s budget to have cut..”

Three people liked Versaggi’s comment before it was hidden.

And Todd Bruce had a few now-invisible thoughts, too: “I’ve had it with the crap Tom Tunney. For the amount of property taxes we pay, we expect to see results in policing and crime prevention. Any beat cop knows this roll call is a waste of time and the citizens of your neighborhood are not as stupid as you apparently think they are. People in this neighborhood are fed up. This sort of thing doesn’t work. Let’s see some results in manpower numbers […] You should be pushing for [Chicago Police Superintendent Garry] McCarthy’s firing.”

In response to Tunney’s 1980’s-era “Throwback Thursday” photo last week, Courtney Greene wrote, “quit the dog and pony show and help your ward. – you’ve posted three community alerts about armed robberies in as many weeks. I want to know what you’re doing to stop them.”

An expression of love for Tunney’s purported agelessness remains in place while Greene’s post is long, long gone.

Initial indications are that comments posted before last Thursday have not yet been hidden or deleted.

Tricky, But Not Tricky Enough

Citizens who posted now-hidden comments can still see the things that they wrote—IF they are logged into Facebook under their own accounts. That’s according to a social media expert who spoke with CWB Chicago on Wednesday.

According to the expert, who spoke under the condition of anonymity because they perform consulting work for politicians and businesses, comments that are “hidden” by a Facebook page administrator remain visible to the comments’ authors and the authors’ friends.

A Reason To Hide

We have always said that people have an absolute right to control everything that appears on their Facebook page, their blog, their newspaper, and anything that is theirs.

But elected officials have an obligation to communicate with their constituents.

Tunney no longer allows the public to post independently to his page.

He still hasn’t responded to a Boystown resident’s September 10 letter about crime.

And, now, he’s hiding feedback from people who (like us) think it’s foolish to pull cops off of patrol for PR sessions disguised as “public roll calls.”

How, exactly, are residents of this ward supposed to engage with the man who represents them?

CWB Chicago editors use Facebook’s “Hide” feature from time to time. In fact, we used it twice recently.  Once to hide a spam post and once to hide an unflattering comment about the food at Alderman Tunney’s restaurant.