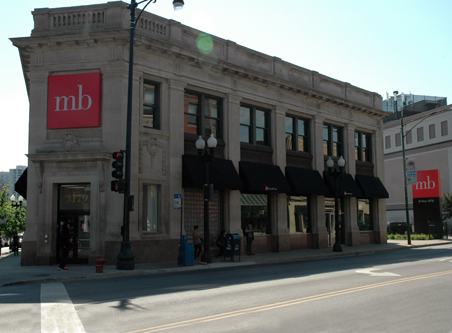 Two offenders are in custody this morning after a woman was mugged near Clark and Belmont shortly before 11 o’clock last night. Two other offenders got away.

At least six people saw the attack unfold outside of MB Financial Bank, 3179 N. Clark, and one man who tried to intervene was knocked to the ground by the offenders, a witness said.

The offenders were described as three black men and one heavyset white woman in their 20’s. One man was about 5’8” and wore a dark hoodie. Another wore a black cap and carried an orange backpack. One of the men had a splint or wrap on one hand.

After the robbery, some of the offenders entered a nearby smoke shop and two of them were subsequently arrested behind the establishment.

The female and one male offender remain at large.

At least three other phone snatchings or robberies have been reported in the area since Sunday morning:

• A man reported that he was robbed of his phone near the 7-Eleven at Sheffield and Addison around 2:30AM Sunday. The offender, described as a 5’9” black man with short dreadlocks, fled in an unknown direction.

• At 2:23AM Monday, a woman’s phone was snatched at the Belmont CTA station, according to a witness. The offender, described as a 6-foot tall black man in a light gray jacket, was last seen running northbound in the alley along the L tracks. According to the witness, the victim got into a taxi and left the scene before police arrived, so no report could be immediately filed.

• A man reported that two robbers approached him from behind near the post office at 1343 W Irving Park Road around 2:15AM Monday and poked an object that he believed to be a gun in his back. They fled with his Sony laptop and a backpack that bears a Cogent Communications logo.

The offenders were described as two black men. One is about 5’11 tall and wore a black hoodie with black pants. The other was a bit shorter and he wore a red hoodie. Both were last seen running northbound from Irving Park and Southport.