“I was walking to work, the sun was out, people were driving down the street. There was nothing I could’ve done except not carry so much in my purse.”              — Eight-year Lakeview resident, robbed this morning. 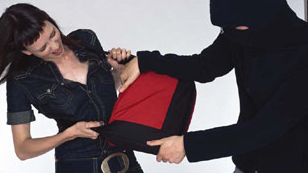 Two more Lakeview women were mugged in the hours following last night’s robbery of a retired policewoman in Roscoe Village. Both women were targeted for their purses in incidents that unfolded between 5 o’clock and 8:30 this morning.

One of the latest victims contacted CWB Chicago to tell her story.

At 5:02AM, a woman reported being mugged near Southport and Roscoe by two “very young” black males. One of them “had something on his head” according to a witness. The other wore a cutoff jersey. The two offenders were last seen running toward Janssen.

Then, at 8:35AM, a Lakeview woman was attacked and robbed near Oakdale and Halsted by a thin black man who took her purse and then escaped in a waiting SUV that had a black female driver. The man had a silver eyebrow ring, a black shirt, and skinny jeans.

“I was on my way to the L when a guy walked up behind me and yelled ‘THIS IS MINE’ while grabbing my purse,” the victim told us this afternoon while requesting anonymity.

“In sheer panic, I struggled with him which started a hair pulling fight between us. He ended up throwing me over a small fence and I let go.”

“I read your blog all the time. I always think ‘be alert’ and ‘pay attention to my surroundings.’ I’m a month away from moving out of Lakeview and I wanted to have good memories of my neighborhood but the crime is out of control and I feel bad for the officers that have to manage all of the assaults and robberies that are not stopping.”

“Thank God for a wonderful young couple who came to my aid. The husband chased after and the wife got the license plate of the getaway car. The couple was wonderful and I cannot thank them enough.”

“They took my purse with keys, wallet, and other random things. The cop showed up in about 4 minutes. He was very nice but said there was pretty much nothing to do except wait to see if they can find this car.”

“I wanted to share this to make sure others in my neighborhood know what happened this morning and to not carry a lot in purses!!”

For reasons that are not clear, police have classified the Oakdale attack as a simple purse snatching rather than a felony robbery.

Purse-snatching classification is appropriate only when no force is used to take a victim’s purse.

That clearly was not the case here. Hair-pulling and fighting and throwing a victim over a small fence is, without question, robbery.