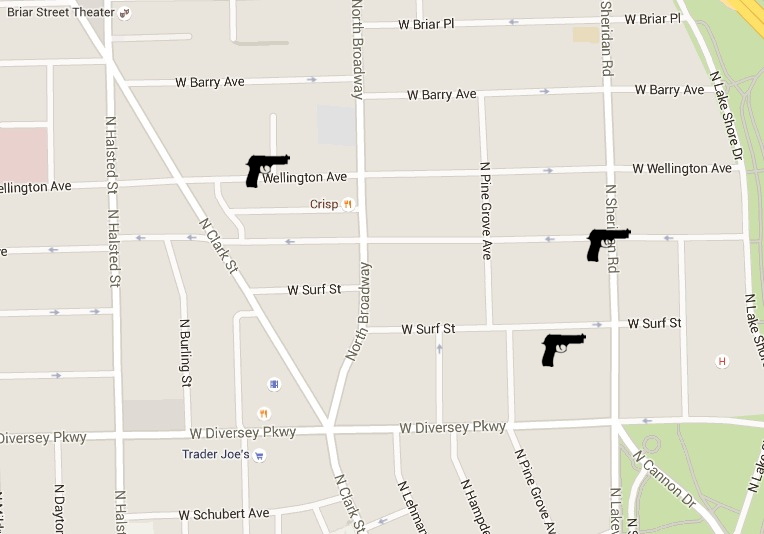 One victim was shot at. Another was pistol-whipped upside the head. And one was forced to lie on the ground while an offender ransacked his car.

No one is in custody for the assaults, which played out over the course of just 45 minutes.

In the first incident, a man reported that an offender approached him as he tried to get into his car near Wellington Avenue and Waterloo Court at 5:15AM. The robber claimed to have a handgun and ordered the victim to lie in the street before entering the victim’s car in search of valuables.

The offender was described as a black man in his mid-20’s who wore a dark jacket over a red hoodie. He was last seen driving northbound on Waterloo Court in a red 4-door Chevrolet Cobalt.

About 10 minutes later, two offenders approached a man in an alley behind the 400 block of W. Surf Street, produced a handgun, and announced a robbery. An offender fired one shot from a semi-automatic handgun during the incident, police said.

A CPD evidence technician recovered a shell casing from the scene.

This victim described the offenders as two black men in black hoodies who stood about 6-feet tall. He last saw them running northbound.

Finally, around 6AM, two offenders armed with at least one gun approached a man outside of the 2930 N. Sheridan Road condo building in a robbery attempt. One of the offenders struck the victim in the head with a handgun, which was described as a black semi-automatic.

The third victim described the offenders as two black men dressed in all black. They stood about 5’9” tall and had thin builds.

——–
Support CWB Chicago With A Donation To Offset Our Newsgathering Expenses
About CWBChicago 4360 Articles
CWBChicago was created in 2013 by five residents of Wrigleyville and Boystown who had grown disheartened with inaccurate information that was being provided at local Community Policing (CAPS) meetings. Our coverage area has expanded since then to cover Lincoln Park, River North, The Loop, Uptown, and other North Side Areas. But our mission remains unchanged: To provide original public safety reporting with better context and greater detail than mainstream media outlets.
Website Facebook Twitter YouTube