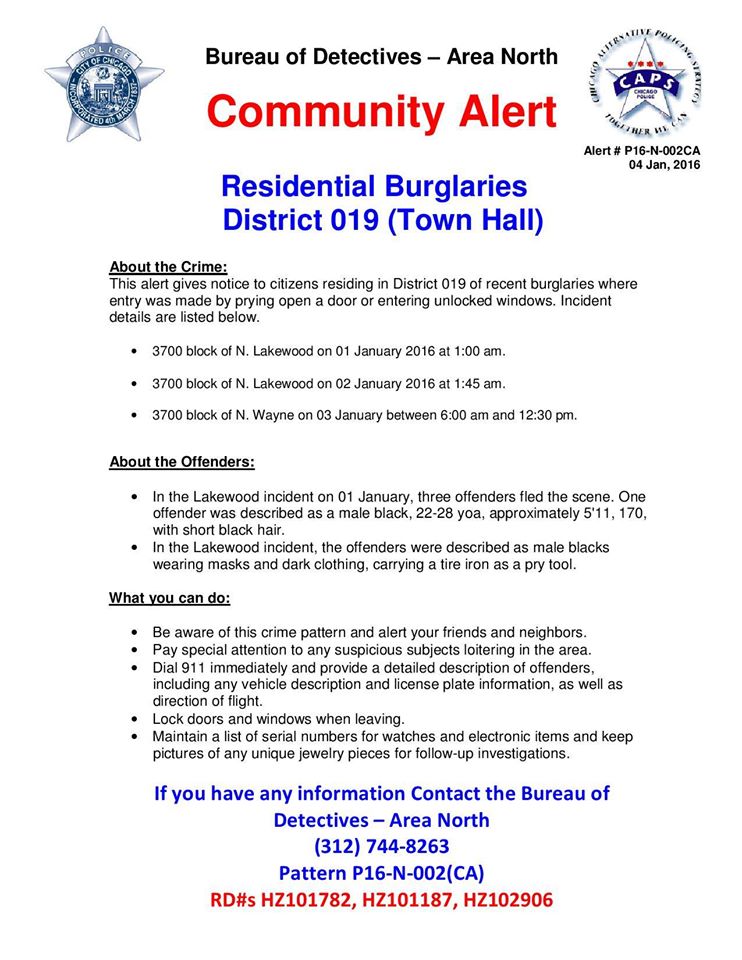 Detectives today finally issued an alert to warn residents of home burglaries in our area.

Unfortunately, they only listed 3 break-ins tied to a specific pattern in the alert, so the scope of the nearly two-month-long problem is not evident.

How many burglaries have there been?

Well, between November 1 and December 31, 2015, the three police beats that cover Wrigleyville and Boystown recorded 45 burglaries.

That’s almost double the 23 burglaries reported during the same period in 2014. In 2013, the area had 28 burglaries during November and December.

Here’s a look at the latest batch of break-ins recorded by CWB editors.

According to a source, the bulk of forced-entry burglaries to homes are taking place by prying or kicking back doors.

January 2
• 3700 block of N. Lakewood (Attempt. Homeowner scared away two offenders who tried to pry open her back door. They were wearing ski masks, she said.)
• 3400 block of  N. Bosworth

Other break-ins that have been confirmed since our last burglary update on December 28:

– INTRUDERS: Suspect Vehicle Identified As Burglary Spree Rolls On (November 15)
———-
Email us. Facebook us. Twitter us.
About CWBChicago 4360 Articles
CWBChicago was created in 2013 by five residents of Wrigleyville and Boystown who had grown disheartened with inaccurate information that was being provided at local Community Policing (CAPS) meetings. Our coverage area has expanded since then to cover Lincoln Park, River North, The Loop, Uptown, and other North Side Areas. But our mission remains unchanged: To provide original public safety reporting with better context and greater detail than mainstream media outlets.
Website Facebook Twitter YouTube