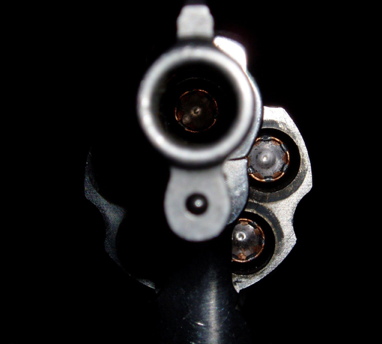 Two Lakeview women reported being robbed at gunpoint in separate incidents this morning and one of the victims said the offenders fired shots at her. The offender descriptions in both cases are similar, police said.

The reports come during an eventful month as our neighborhood’s robbery count nears record-setting territory for February. January saw more robberies here than during the same month in 2014 and 2015 combined.

The robbers are described as two black men wearing all black clothing. One of them had a red scarf covering his face. They fled southbound on foot.

Another woman told police that she was robbed and physically searched by two black men wearing all black clothing in the 1300 block of W. Cornelia around 4:05AM today.

The men, armed with a silver handgun, emerged from a nearby alley as the victim stepped outside to look for an Uber that she had ordered to take her to the airport, a source said.

One of the offenders was tall and appeared to be wearing a red mask while the other was shorter and heavier, the victim said. Both men were last seen running northbound in the east alley of Southport.

Among other incidents in the area this week:

• A woman reported that five men wearing ski masks and dressed in black clothing knocked her to the ground and took her purse and computer in the 3100 block of N. Greenview around 1:45 Saturday morning.

• A man told police that an offender tried to force him to withdraw money at two Boystown ATMs around 1AM on Friday. Both ATMs, including one in the 3400 block of N. Halsted, failed to distribute money and the offender fled. The suspect is described as a white male in his 30’s who was wearing a gray hoodie and jeans.

• Around 11PM on Thursday, a woman reported that two men snatched her purse in the 3400 block of N. Lakewood. She described the offenders as two short Asian men dressed in all black.

• A man flagged down police in the 3300 block of N. Sheffield to report being robbed at gunpoint in a nearby alley around 2:05AM on Tuesday. The suspect is described as a black man wearing white gym shoes and carrying a white backpack. He was armed with a black semiautomatic handgun. The victim lost about $100.