Yesterday’s St. Pat’s party in Wrigleyville was better organized and seemed to have a more robust police presence than annual green plague of recent years.

Based on conversations with sources and first responder radio traffic, CWB estimates that 7 people were arrested during the all-day affair. More than two dozen revelers were hauled off to hospitals via ambulance.

Last year, 17 people were arrested and more than 40 ambulances were summoned during the Irish invasion.

Police tactical units from four districts patrolled Clark Street. And, for the first time, someone  in city government decided to erect barricades to keep drunks out of traffic. Incredible! 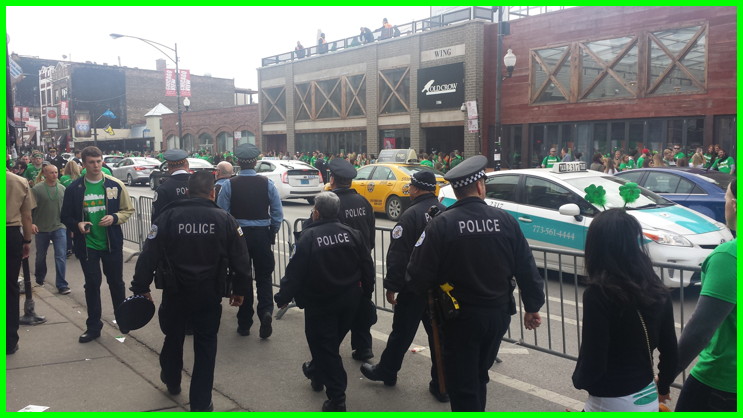 1:26PM — Dust off the ambulance. We have a female unconscious outside of Sluggers World Class Sports Bar, 3540 N Clark.

2:16PM — Callers at Addison and Halsted report seeing a man with a gun in his pocket. He is the first of many persons who will be described as wearing green clothing.

2:44PM — Caller says her neighbor just whacked her with a bottle. 1300 block of Addison.

2:45PM — Courtney says she was jumped at Roscoe and Clark. The offenders fled in an unknown direction. They were wearing green clothing. 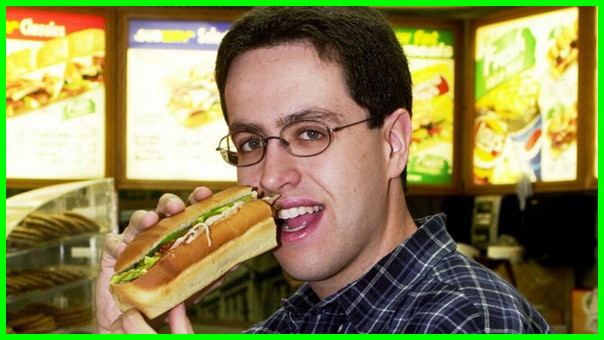 3:05PM — Burglary in progress. Security reports two white men in green sweatshirts have climbed to the upper deck of a parking garage north of Wrigley Field.

3:55PM — Sergeant: “Fire is really blocking everything up over here” with all of their, you know, ambulances. Police close Clark Street to traffic until the casualties are wheeled away.

4:14PM — Dispatcher: “Battery just occurred. 3441 Sheffield. See Jessica. This call has an hour on it, so she’s probably gone.” 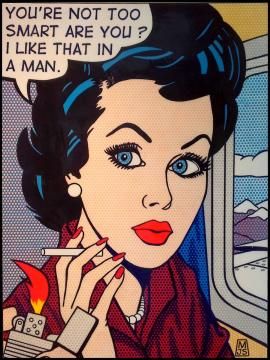 4:16PM — In a masterful piece of managerial logic, a sergeant announces that officers won’t respond to reports of DUI drivers unless the DUI driver is stationary.

4:27PM — Broadway and Wellington for the drunk woman wrestling a cab driver in the street.

4:31PM — Roscoe and Ashland for the drunk man and drunk woman fighting over their car keys.

5:09PM —We have a tie in the race to be the first person arrested in Wrigleyville. Two men are being locked up at Clark and Patterson.

6:26PM — Officers stumble across a fight near McGuigan’s Irish Pub, 3358 N Ashland. An ambulance is soon summoned for a victim who’s been conked over the head with a bottle.

6:32PM — Two calls from the Hidden Shamrock, 2723 N Halsted. One caller says a patron tried to steal a beer. The other caller says someone’s threatening to shoot people inside the bar. The first caller was right. 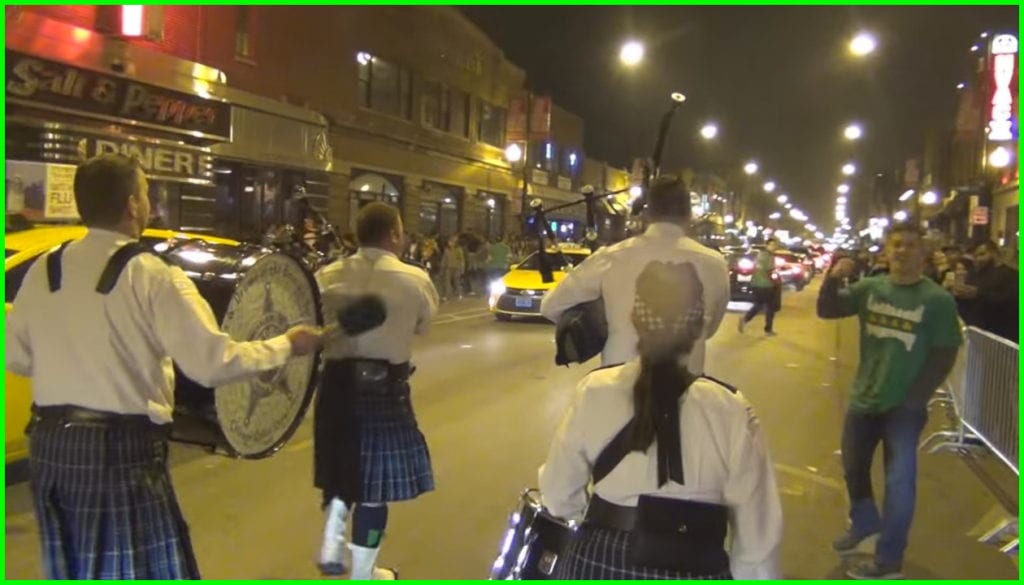 7:00PM — The Chicago police pipe and drum band marches through Clark Street traffic. It’s on video thanks to the1stmikec

7:10PM — Reveler withdraws $200 from an ATM at 948 W Addison. A stranger walks up to him and claims to have a gun. Reveler hands over his $200 plus $20 more that he has in his wallet. The offender, described as a 6-foot-3-inch, 240-pound black man dressed in a red hoodie, fled toward the nearby 7-Eleven. His description will be the only one heard on police radio today that does not include the word “green.”

8:00PM — An Amazon Prime driver rings a doorbell in the 3900 block of Fremont to deliver a package. The drunken customer responds via intercom that he’s going to get his gun and come downstairs. Mr. Amazon Prime runs away and calls police. 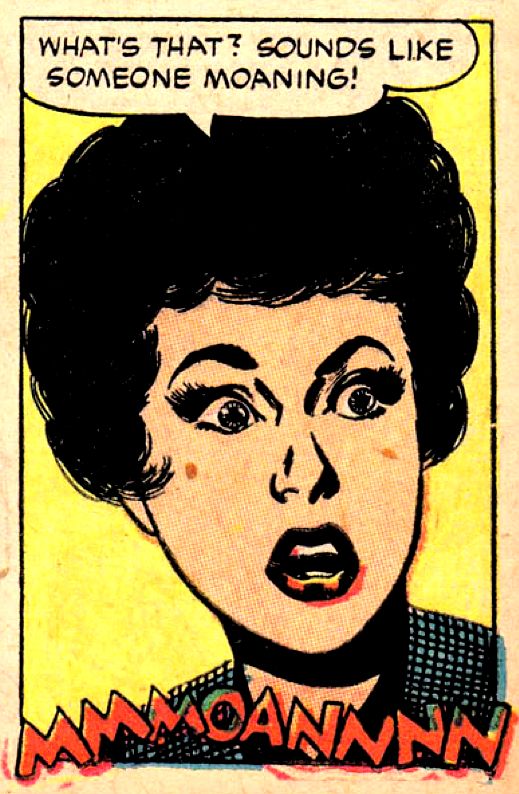 8:34PM — There’s a man down with broken ribs after being beaten in a parking lot at Clark and Grace. He’s transported to Weiss Hospital.

9:01PM — Pedestrian struck by a car. Clark and Roscoe.

9:14PM — Dispatcher: “Clark and Racine. We got multiple calls of a man screaming for help and neighbors yelling at him to shut up.”  Cop: “Yeah. That was our guy with the broken ribs.”

9:28PM — Fire’s rolling for a 32-year-old man who’s having heart trouble after eating a pot brownie. Cornelia and Lakewood.

9:43PM — Reckless driver. Broadway and Belmont. Male in a green Nissan Pathfinder swerving all over the road and throwing bottles.

9:48PM — Dispatcher: ”If anybody’s near Clark and Irving…a concerned citizen says two intoxicated male whites are fighting and one of them is losing.”

10:13PM — Michael called 911 to report that his friend Bridget is lost near Addison & Clark. She’s blond and wearing a green shirt.

10:14PM — Now a woman is calling to report that Bridget has either gotten lost or, alternatively, roofied.

10:16PM — Over in Boystown, a caller reports that there’s a man selling drugs inside of D.S. Tequila. The alleged dealer is described as a white man wearing green Mardi Gras beads.

10:16PM — Unknown officer: “Can you help us on these descriptions? Everybody out here has a green shirt and blue jeans on today.” 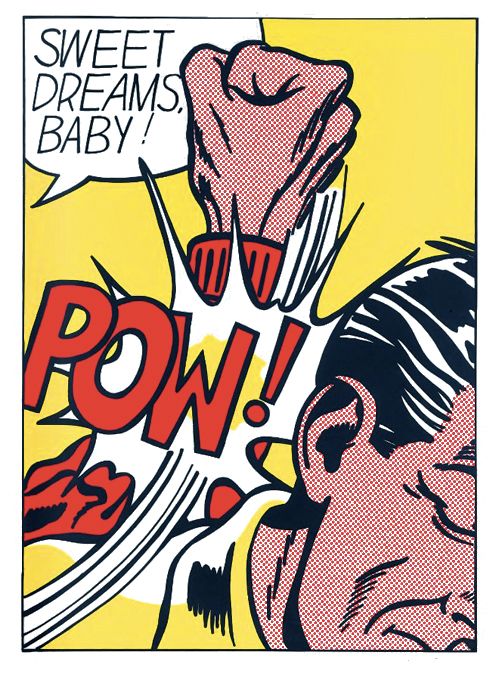 10:40PM — Large fight breaks out at Roscoe and Halsted. Police eventually find a victim at the nearby 7-Eleven, bleeding profusely from his eye. The victim refused to sign a complaint.

11:05PM — Back in Boystown: Four men fighting outside of Hydrate, Halsted and Cornelia. Police find a man beaten in the alley. He’s carted off by ambulance.

MIDNIGHT — The caller says he can’t leave Peet’s Coffee & Tea because there are a bunch of guys outside waiting to beat him up. 3500 N Halsted.

12:03AM — Man flags down police at Racine and Eddy to report that two black men and a black woman wearing all green clothing and jeans pulled out a gun and tried to rob him. He managed to run away.

12:06AM — The man tells police that he doesn’t want to file a report after all. He’s just going to go home.

12:27AM — Jimmy says the door to his apartment is kicked in and he is 99% sure that the tenants upstairs who are having a party did it! 3800 block of N Sheffield.

12:30AM — One arrest for traffic violations, Addison and Sheffield. The car will be impounded.

1:11AM — Clark and Belmont for the woman who’s threatening to stab people at the #22 bus stop. “They think she’s a mental.”

1:49AM — Officer: “This guy looks like he fell flat on his face, but he’s refusing service, so we’re done here.”

1:50AM — Hey! Remember that car that the police were impounding at Addison and Sheffield? Yeah, well, two women got into it and drove away. They’ve been caught and arrested at Belmont and Sheffield.