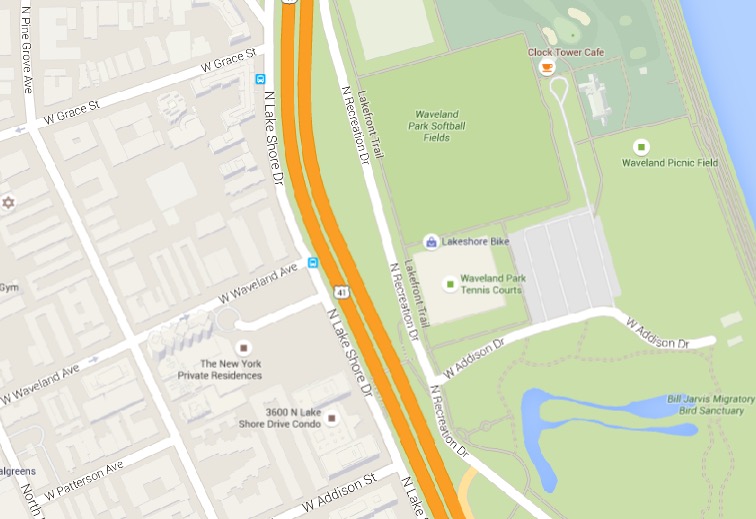 A Chicago police officer who was handling a routine matter in the 3600 block of N. Recreation Drive early Sunday morning witnessed shots being fired from a vehicle on nearby Lake Shore Drive—and two of the gunshots were transmitted on the officer’s emergency radio call of “shots fired.”

The officer reported that multiple shots were fired from a black SUV in the northbound lanes of Inner Lake Shore Drive near Addison Street at 4:17AM. The vehicle turned west on Grace Street and disappeared before the officer was able to cross over from the park.

Officer: “Shots fired… [Gunshot]…[Gunshot]…Hold on a second.”
Dispatcher: “All right units. 22-Robert’s on a stop at 3600 Rec Drive and can hear shots fired”

The Rec Drive area and nearby lakefront are popular after-dark hangouts for members of several gangs. CWB Chicago has documented large swaths of gang tags along the Lakeview seawall over the past two years.

Two people were shot during a gang-related conflict near the tennis courts at 3600 N. Recreation Drive in July 2014.

A 20-year-old man from the Austin neighborhood has just received a 2-year prison sentence for possessing a loaded handgun during a melee near the baseball fields at 3700 N. Recreation Drive last summer.

Jesus Amaya pleaded guilty to one count of aggravated unlawful use of a weapon. Seven other weapons-related charges were dropped in the plea deal.

Three other men were also charged in the case that witnesses said involved a man with a gun and people fighting on the lakefront rocks and the tennis courts along Rec Drive.

Officers recovered one firearm and rounded up several offenders, but up to 15 others—including one who was allegedly armed with a second gun—escaped on foot and by vehicle.