UPDATE 12:28PM — The stabbing victim is identified by police in other media as a male. CWB Chicago editors have been in touch with the victim, who identifies as female. Our original report from this morning follows.
——————————–
One woman was stabbed and several people were injured as large crowds overtook Boystown’s Halsted strip following the first night of Chicago’s Pride Fest early Sunday.

Trouble began brewing around midnight and seemed to emanate from the 7-Eleven parking lot at 3407 N. Halsted, where police estimated a crowd had grown to over 400 people by 3AM.

A police supervisor ordered all available 19th district officers to the intersection of Halsted and Roscoe to handle the incidents.

Halsted Street was closed to vehicles for about an hour after pedestrians took over the traffic lanes around 3 o’clock.

Officers who were blocking traffic at Halsted and Belmont reported that a woman was stabbed in the back just steps from their location at 3:18AM. Witnesses also reported that she had been pepper sprayed.

She is reported in good condition at Illinois Masonic Medical Center, police said.

“It’s a zoo up here” he wrote. “These gay kids are crazy. Pulling out knives…It’s 3:45 and this is happening now. I gotta go. People trying to jump on my bike. Trying to avoid the New York from coming out.”

A witness reported seeing a man get robbed outside of Wrigley Field around 4 o’clock this morning, but police, tied up with the Halsted mess, were unable to launch an immediate response. All parties were gone by the time officers became available. 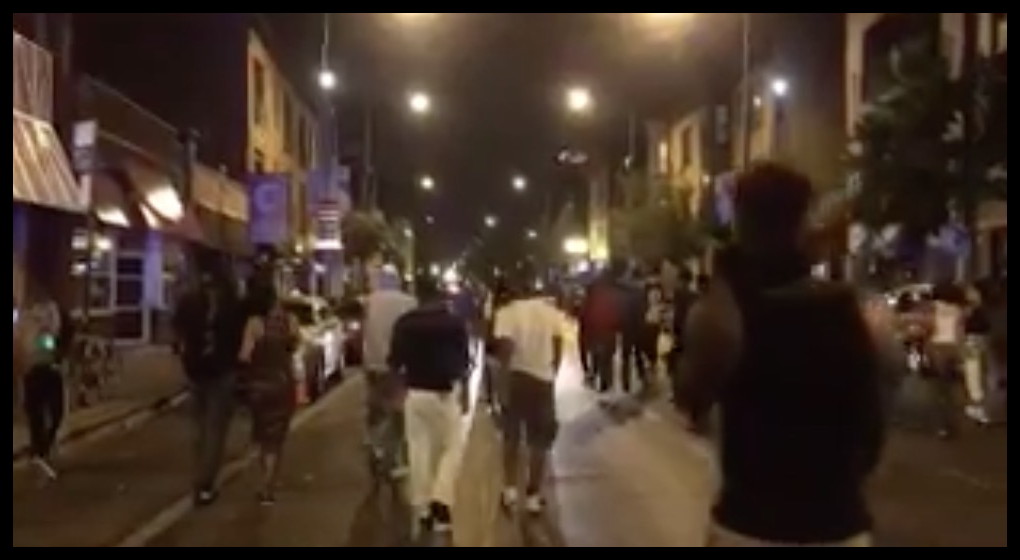 There were no signs of the “hundreds of officers” that Chicago Police Superintendent Eddie Johnson said would be handling North Side events, including pride activities. The 19th district has only been staffed by its normal allotment of officers this weekend, according to multiple cops who spoke with us off the record.

One police executive from the Area North office was in Boystown during Pride Fest’s operating hours.

According to a city source, the 19th police district was in “radio assignments pending status—meaning that no officers were available to immediately handle incoming calls for police service—for 18 of the 36 hours between noon Friday and 12:01AM today.

Pleas support CWB’s newsgathering efforts with a donation to our Tip Jar.
———-
Email us. Facebook us. Twitter us.
About CWBChicago 4360 Articles
CWBChicago was created in 2013 by five residents of Wrigleyville and Boystown who had grown disheartened with inaccurate information that was being provided at local Community Policing (CAPS) meetings. Our coverage area has expanded since then to cover Lincoln Park, River North, The Loop, Uptown, and other North Side Areas. But our mission remains unchanged: To provide original public safety reporting with better context and greater detail than mainstream media outlets.
Website Facebook Twitter YouTube