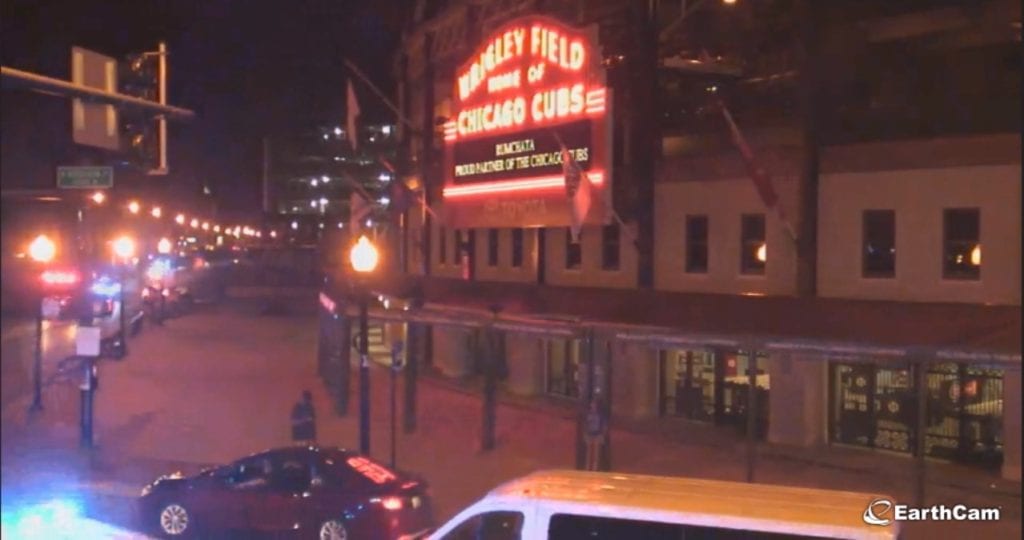 As CWB Chicago reported exclusively yesterday, an off-duty police officer was knocked unconscious across from Wrigley Field early Tuesday when he intervened in a disturbance at Clark and Addison.

A man and a woman were taken into custody, but the primary offender—who allegedly went through the off-duty officer’s pockets after knocking him unconscious—slipped away.

The entire incident unfolded beneath EarthCam’s 24/7 Wrigley Field webcam. While the attack took place outside of the camera’s eye, all of the audio was captured.

We have now posted an excerpt of the feed that was provided to us shortly after the attack.

A police source has confirmed that Area North detectives secured a copy of the webcam recording on Tuesday.

There is quite a bit of noise from traffic and a particularly annoying leaf blower that was being used inside of Wrigley Field, so we recommend using earbuds or headphones.

Here is a rough transcript of the clip:

Boyfriend: What are you doing? Don’t do it! HEY! Watch out!

Girlfriend; Get off my man! Stop! Stop!

Officer: Off-duty police! Get off!

Girlfriend: What the fuck!

Boyfriend: Oh my God! [Unintelligible]. I don’t give a fuck. [Horns honking / Unintelligible yelling and talking]

Unknown male 2: He knocked the po-po out.

Boyfriend: You OK? You OK?

Officer: Can you help me?

Girlfriend: That guy’s a fucking cop!

Boyfriend: I know. I know.

Boyfriend: God damn it! What the fuck is wrong with you?

Girlfriend: What the fuck you want to do for him [name withheld]?

Girlfriend: You are evil.

Boyfriend: He came to my aid. There were two guys. One was verbally hitting on my girlfriend and I was like “what are you doing.” One of these guys tried to jump on me and that’s when this guy who got hit got fucking blindsided.