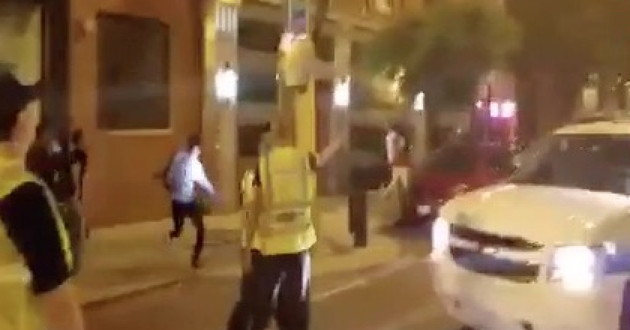 Whoops! We we wrong—or perhaps just optimistic—when we reported Monday that seven people had been arrested during and in the aftermath of last weekend’s Pride Fest street festival in Boystown.

In fact, EIGHT people were arrested.

And, yet another video has emerged of Chicago police and Northalsted private security attempting to reign in widely-reported street fights that resulted in at least one stabbing.

Multiple stun guns can be heard zapping in he background of the latest video as the camera moves north on Halsted near Aldine last Sunday night.

“These are young kids!” one voice is heard saying as a group tends a young person on the ground nearby.

In addition to the three arrests that CWB Chicago reported earlier this week, the following five persons have been charged with crimes during and after Pride Fest on Sunday:

• 21-year-old Renardo Coleman of the Grand Crossing neighborhood was arrested at Belmont and Halsted after police say they found him in possession of a BB gun with the orange safety tip removed to make it look like a real handgun. Coleman received a 2-day sentenced after he quickly pleaded guilty this week to possession of a replica firearm.

• In the same car with Coleman was 21-year-old Alicia Simmons of the New City neighborhood. When she learned that Coleman was being arrested, Simmons allegedly asked police, “Can I keep my Tazer? I use it for protection. It’s crazy out here.” Officers recovered Simmons’ Tazer and then arrested her. She’s charged with unlawful use of a weapon.

• Justin Davis, 18, was arrested in the 3400 block of N. Halsted and is charged with reckless conduct. He’s from the Austin neighborhood.

• 46-year-old Brian K. Page of the Near North Side was charged with assaulting an off-duty Chicago officer during one of the many disturbances at Halsted and Aldine late Sunday night.

• Paris Jackson, 25, of Woodlawn is charged with two counts of battery after she allegedly hit a Halsted Street bar doorman in the face and then and then spit in the face of a Northalsted security officer who came to the doorman’s assistance.