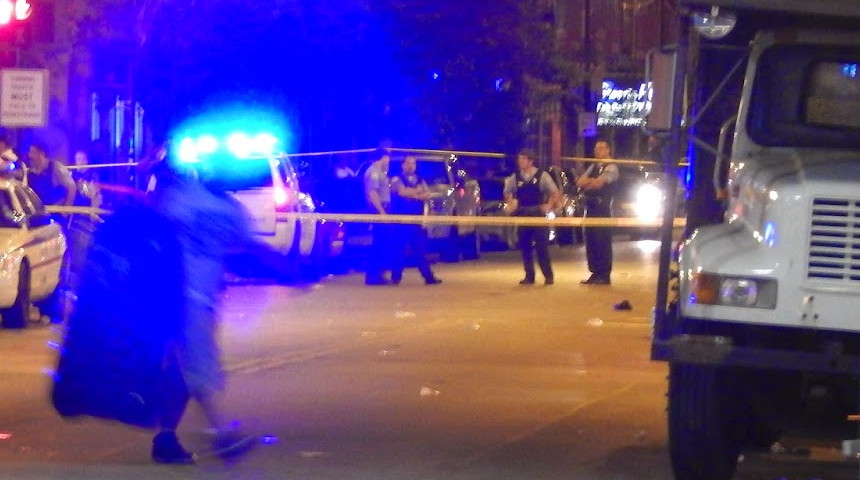 A wave of violent crime is washing across the North Side this year as Chicago police officers face increasing threats and scrutiny.

Through July 31, violent crime reports are up in every lakefront neighborhood from the Loop to Edgewater. 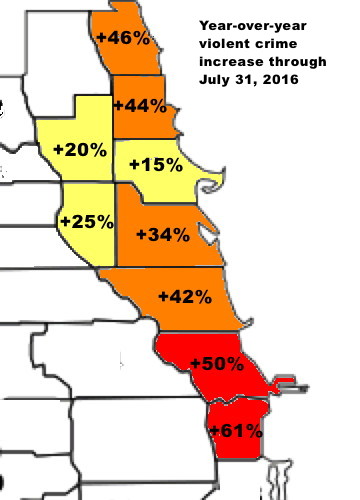 Reports of the most serious crimes—homicide, criminal sexual assault, robbery, and aggravated battery—are up as much as 61%. Uptown saw the smallest increase in our study, with 15% more violent crime this year.

And virtually every area is also seeing an increase in total crime. Only North Center showed an overall crime drop through July 31, with a 4% reduction compared to the same time last year.

The Loop has seen crime jump 26% overall this year, the most of any area. Near North is up 15%. Lincoln Park and Edgewater have both seen 11% overall crime increases.

Citywide, homicides are up more than 40% and shootings are up 50% over last year, according to the authoritative tracking of HeyJackass.com

A neighborhood-by-neighborhood crime breakdown is shared at the end of this story.

Police officers who spoke with us consistently offered similar reasons for the North Side crime trend: A sharp reduction in proactive street stops by officers; a systematic reduction in local police manpower under Mayor Rahm Emanuel; and a pullback from aggressive policing as officers ensure that they do not become the next cop to be caught on viral video.

The first signs of trouble came early this year when the Chicago Police Department began requiring officers to complete a two-page “Investigatory Stop Report” (ISR) whenever they stop a person on the street.

Officers have been told that ISRs are being reviewed by a retired federal judge as well as lawyers for civil rights groups, a process that many proactive cops believe is a witch hunt.

Narcotics arrests, one of the most common arrests to stem from street stops, are down 47% this year citywide.

The Threats To Kill Cops

Perhaps the greatest force working against cops today are videos of officer-involved shootings, very often found to be justifiable, that are being seen widely and with increasing regularity.

As outrage against police grew in some communities, officers learned that gangs and lone wolves were targeting cops for street executions.

The department responded to the threat by requiring at least two police officers to ride in every patrol car.

That order slashed the number of police units on patrol across some North Side districts in half.

Before the buddy system was rolled out, nearly every beat car in our local 19th police district had just one officer during daytime hours, according to a source.

As a result of the 2-man minimum, the district—which stretches from Fullerton to Lawrence and from the Chicago River to Lake Michigan—has operated with 50% fewer patrol units.

The 19th district’s evening shift, which had been operating with approximately 33% solo officers, was similarly affected.

Reliance on so-called “99” units—CPD’s term for officers who are working alone—allowed Emanuel to slash police manpower across the area while technically keeping units on patrol.

Now, with available units slashed, police districts are running out of cops with never-before-seen frequency. When all officers are on assignments and none is available to handle incoming 911 calls, the city’s Office of Emergency Management and Communications declares the district to be in “Radio Assignment Pending” (RAP) status.

An examination of RAPs in our neighborhood found that there were 32 RAPs declared in the 19th district between January 1 and July 15 of this year.

But another 29 RAPs have been record since July 15.

RAP frequencies have soared across the city, with traditionally “safer” neighborhoods—those areas that Emanuel’s administration intentionally cut police resources—suffering the most.

The 19th district has entered RAP status 61 times this year according to tracking maintained by CWB Chicago. By comparison, the district had 43 RAPS in all of last year and 50 in 2014.

This graph shows the year-over-year changes in selected crimes for North Side neighborhoods. N/A indicates that a percentage cannot be calculated.  Police this year have found one homicide in Lake View and another in North Center to be non-criminal acts of self-defense.