October’s looking ugly. We’re on pace to have more robberies reported in Wrigleyville and Boystown this month than nearly any other month in the past 15+ years. 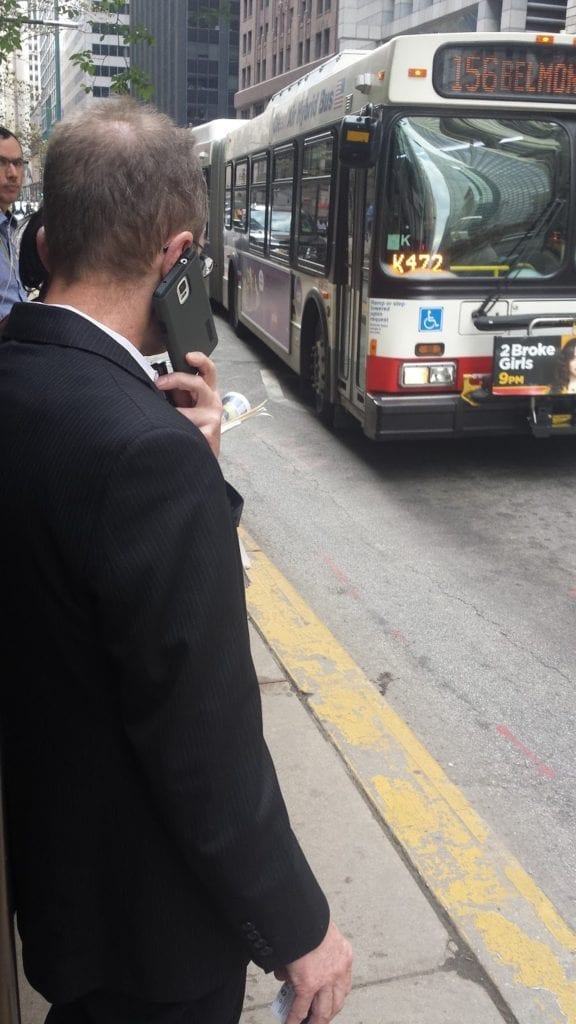 So, we decided to revisit some robbery prevention tips that local Alderman Tom Tunney has been sharing over recent years.
In a real stroke of luck, one of our editors remembered that she had some pictures on file to illustrate what you should not do, according to the alderman’s tips.
Last October, the editor blew off work a couple of hours early, headed to her usual bus stop and there–right before her eyes–was a dapper businessman who clearly had not heard many of these valuable tips from the city.
Tips like these:
1. “Stay off your cell phone.”
By using barely more than one finger to hold his phone to his ear, this poor fellow is just asking to have the device ripped away by a passing criminal. Our gracious editor could have reached out, snatched it from his hand, and run around the corner before he knew what happened. 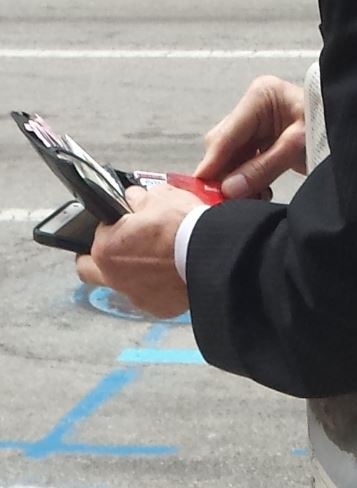 2. “Don’t advertise your property!”
and
3. “Remain alert at all times!”
Oh, now this is even worse.
Here he is, wrapped up in his own little world, unaware of his surroundings. (He didn’t even notice that our editor was taking a bunch of pictures of him.)
A less scrupulous individual could have run up at this moment and taken the fellow’s phone *and* wallet from his fingertips.
That Bank of America card would’ve come in handy for a less-trustworthy citizen. 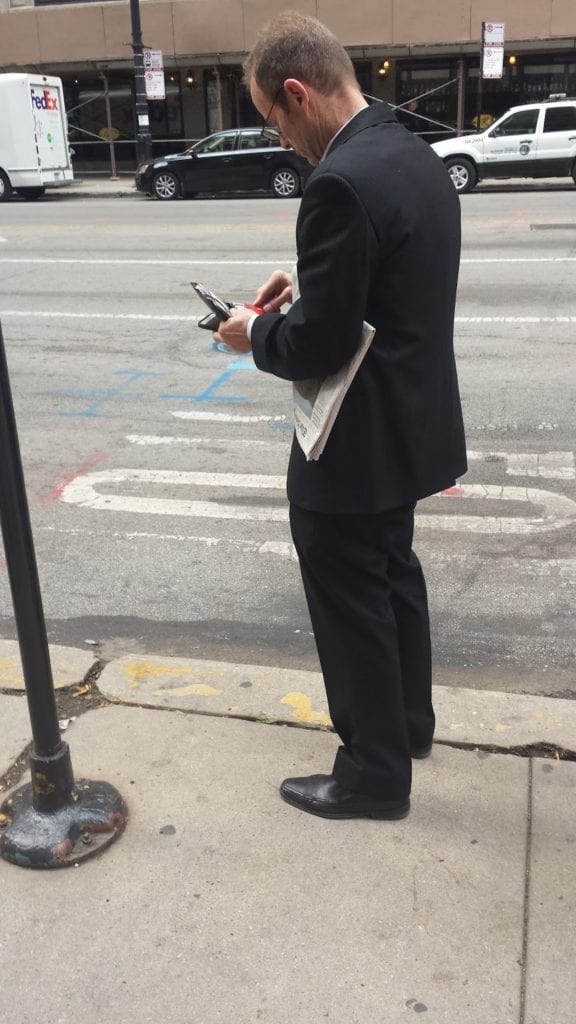 Ironically, two of the 19 robberies reported in our neighborhood this month have targeted residents who were standing at CTA bus stops on their way to work.
One was in the 3300 block of North Halsted and the other was in the 800 block of West Sheridan.
Imagine how inviting the man in our pictures would be in a robbery situation–just going about his daily routine, unaware of his surroundings, flashing his cell phone and wallet to the world.
P.S.–If you know the gentleman in these photos, please do him a favor. Point him to this link for important safety tips from Alderman Tom Tunney.
———-
Email us. Facebook us. Twitter us.
About CWBChicago 4363 Articles
CWBChicago was created in 2013 by five residents of Wrigleyville and Boystown who had grown disheartened with inaccurate information that was being provided at local Community Policing (CAPS) meetings. Our coverage area has expanded since then to cover Lincoln Park, River North, The Loop, Uptown, and other North Side Areas. But our mission remains unchanged: To provide original public safety reporting with better context and greater detail than mainstream media outlets.
Website Facebook Twitter YouTube