One of three men accused of beating and robbing a 64-year-old man in Boystown last weekend mugged another person in Boystown 3 years ago, according to a CWB Chicago review of court and police records.

And Keyruni Buford’s Facebook posts show he has been spending some nights trawling Halsted Street and crashing at a local youth shelter, even though he had a home on the South Side. 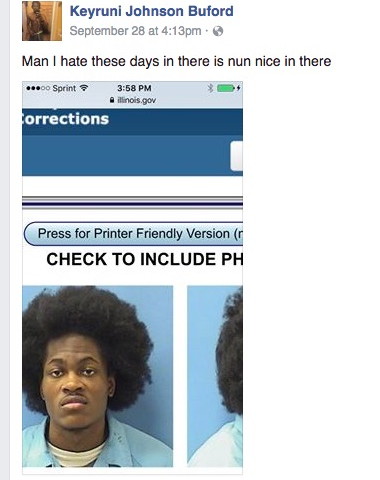 Buford was released on parole in January, three years after robbing a Boystown resident in the 800 block of West Cornelia on the afternoon of February 21, 2013.

He returned home, landed a job, and smoked an enormous amount of pot, based on his social media presence.

“Man I hate these days in,” he wrote. “there is nun nice in there.”

Then, just after midnight Saturday, Keyruni Buford—hating his prison days—punched a senior citizen in the face three times, took the victim’s phone and reached into the man’s pants to take his wallet, according to court records.

Police say the victim’s credit cards and cash were found on Buford. Two men arrested with him had the man’s wallet and phone, cops said.

Posts leading up to Buford’s arrest show stops at various neighborhood service agencies, many of which insist that their clients do not contribute to crime in our area (and that residents who suggest otherwise are racist, homophobic, or any number of other labels).

But on August 28, Buford—a 23-year-old violent crime parolee with a perfectly comfortable home on the South Side—posted a video showing him getting off at the Addison Red Line station and smoking pot as he walks to Lakeview Lutheran Church, 835 West Addison, home of The Crib shelter. There, he walks down to the shelter entrance and knocks.

A couple of weeks later, Chicago police went to The Crib at 3:46 a.m. on September 17 because “Mr. Buford” said that “a female robbed him and tried to fight him…inside the youth shelter,” according to city records. No one was arrested.

In addition to the fact that Buford had an actual home, we have to wonder — would a legitimately homeless “youth” abuse and ridicule old homeless people? Buford has. On video. Twice.

In this video, Buford walks up to a homeless man who’s crashing next to a Loop planter. Buford checks twice to make sure that his friend is rolling video, then he pours an entire bottle of water on the man’s property.

The next night, Buford was walking and videoing in the Gold Coast when he hassled another homeless man near Oak and State.

Everyone we know wants to help people who need it, especially struggling kids. But Buford demonstrates the exact problem that so many people have asked The Crib and other agencies to address. He isn’t a kid. He isn’t homeless. He is, however, a convicted violent criminal who found something he needed in this neighborhood—a target rich environment and a place to crash for the night.

Buford’s videos also show the flip side of a Boystown mystery. “Why,” many people wonder, “do so many folks come to our neighborhood at night and just wander the streets for hours on end?”

While his videos don’t answer the “why,” they do demonstrate that Buford was a serial wanderer. For 15 to 20 minutes straight, he Facebooks as he walks circles around Boystown.

And a series of videos from early on September 4 show 19th district officers getting a handle on a street disturbance at Buckingham and Halsted.

Buford and a friend wander into traffic, tease a police paddy wagon, and yell out “12! 12! Gang members! Gang members!” as police arrive. “12” is slang for police. 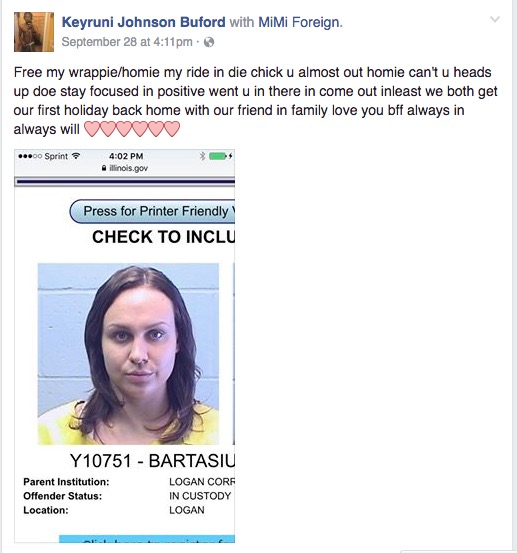 Two days before this weekend’s robbery, Buford looked forward to seeing his BFF, Milda Bartasiunnaite. Bartasiunnaite happens to be in prison for helping Buford with that 2013 robbery on Cornelia.

“Stay focused,” he wrote in a post to her, “when you come out…we both get our first holiday back home with our friend in family.”

Bartasiunnaite will be paroled three days before Thanksgiving. 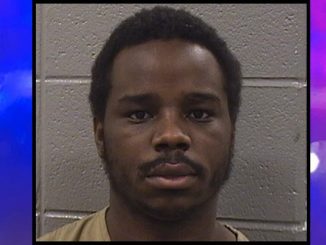