Let’s rewrite the narrative, everybody.

Oh, yeah. And she also yells at white people.

Days after a Boystown woman’s rant against a manager at our local Michael’s crafts store went viral, a new video has emerged that apparently shows the same woman blasting the staff at our neighborhood Peet’s Coffee shop.

“You are the bitch. You are literally the bitch,” she bellows at a bemused barista.

Three snaps and a ZEE, girl!

“This is not your town, this is Chicago, and you’re not going to call women ‘bitches,'” the woman fires, laying down the law as to exactly what kind of conduct is appropriate in public.

The video emerged late Monday, but was reportedly recorded in July at the cafe located on the corner of Halsted and Cornelia in Boystown.

“Oh my God! You’re a flooooor managerrrrr,” she wails while giving her hips a good wiggle.

Then, she lays into Bobby the manager about “filing a police report against Becky” and all sorts of other hot Halsted Street tea. 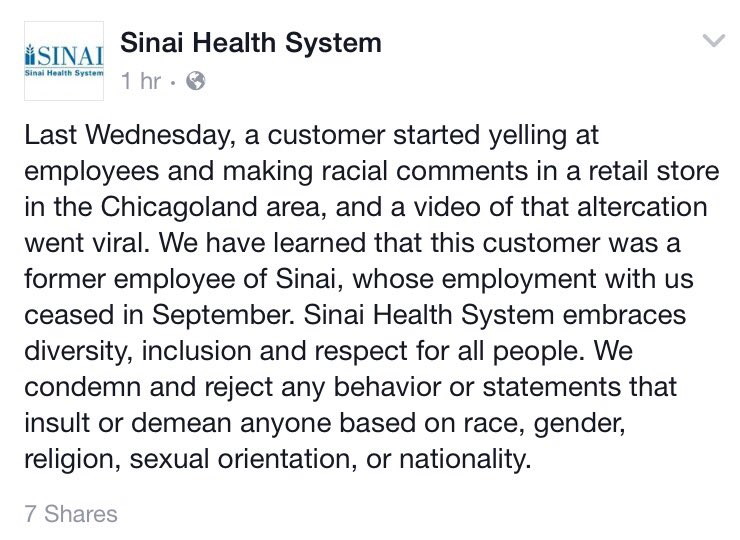 According to unverified information posted widely last night, the woman in the Michael’s video has lived near Peet’s cafe.

“I could stereotype you and call you something,” the timid flower warns. “I’m going back to my $90,000 a year job while you sit down here.”

According to Sinai Health System, the woman in the Michael’s video “ceased” working there in September, about 2 months after this video was recorded.

A GoFundMe campaign has raised more than $13,000 for the Michael’s manager who was allegedly targeted in the widely-viewed outburst that was filmed last Wednesday at 3131 North Clark.

We have absolutely no idea why the manager deserves $13,000 for that. And the Peet’s Coffee employees are probably wondering the same thing.