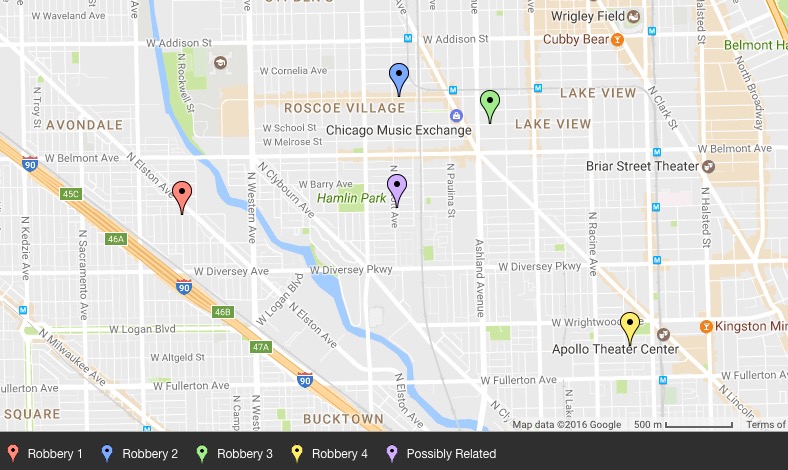 Detectives are investigating a series of armed robberies of North Side pedestrians by a group of masked men on Wednesday evening. The attacks played out across Lakeview, Lincoln Park, Roscoe Village, North Center, and Avondale during a single hour. No one was seriously injured, and no arrests have been reported.

Around 7 p.m., a victim reported being robbed by five men near the 3000 block of North Talman in Avondale. The victim said one man had a gun, another had a knife, and all appeared to be Hispanic. They fled in a black four-door vehicle.

About 20 minutes later, two masked men tried to rob a victim in the 1800 block of West Roscoe in Roscoe Village. The man said both offenders jumped out of a car and each pointed a gun at him while demanding his wallet. He was unable to describe the men, and he said that their vehicle was “dark.”

Then, around 7:40 p.m., a victim reported that five men armed with guns robbed him in the 1500 block of West School in Lakeview. The offenders then climbed into a black four-door vehicle, possibly an Infinity, and fled eastbound on School.

Within minutes, a Lincoln Park woman called for help after three men jumped from a black four-door vehicle and robbed her in the 1000 block of West Altgeld. The offenders took her backpack and wallet before fleeing. According to the victim, one robber was white, another was Hispanic, and the third was black.

A fifth incident on Wednesday was also under investigation.

In that case, a woman told police that three men got out of a dark SUV and tried to rob her at knifepoint in the 1800 block of West Wellington.

The three then tried to follow her as she ran away.

She described the offenders as three white men, one of whom had a mask over his mouth.