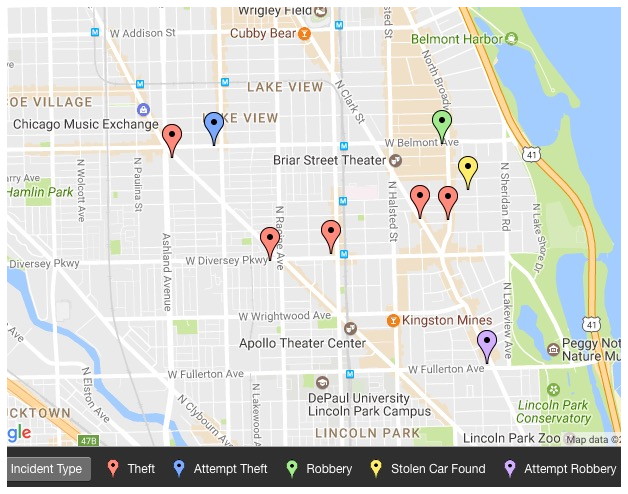 A group of young thieves has stolen cell phones and luxury cars from victims in retail shops across Lakeview over the past few days. And there are now indications that the crew has become more confrontational, bold, and possibly violent.

The team, typically working as a group of three or four, has entered salons, spas, and small retail shops along the Diversey, Clark, Belmont, Lincoln, and Broadway corridors. Once inside, some team members distract customers and employees while others pick up unattended valuables, including key fobs and phones.

The crew became physically confrontational in one incident, which escalated to robbery status, according to a police source.

Witnesses describe the offenders as black males between 15- and 20-years-old; 5’9” to 6-feet tall; 150- to 160 pounds. One wears tan boots. Another has a jean jacket with a tiger or similar emblem on the front. Most are said to be wearing acid wash or ripped jeans.

Here are recent incidents that are known to be connected to the crew according to police reports and CWB Chicago sources:

Saturday, December 10, 2:04 p.m.
Four teens asked to use the restroom and snatched customers’ phones at Gymboree, 3158 North Lincoln. The offenders then fled northbound.

Saturday, December 10, 2:05 p.m.
Four teens entered a salon in the 1400 block of West Belmont and asked to use the restroom. Employees chased the teens out when the group tried to access an unauthorized area.

Tuesday, December 13, early evening
Three offenders stole a key fob from an unidentified storefront in the 2900 block of North Clark and drove away with the victim’s white BMW.

Tuesday, December 13, 7:10 p.m.
Three teens pushed a woman and took two cell phones from an astrology shop in the 600 block of West Belmont. The case is classified as a robbery.

Tuesday, December 13, 7:48 p.m.
Three teens entered Firefly Salon at 1227 West Diversey, took an employee’s key fob, then drove off in the victim’s silver Audi Q5. Some of the offenders were seen leaving the area in a white BMW.

Wednesday, December 14, 4:48 p.m.
Officers on patrol saw three or four suspects matching the thieves’ descriptions parking the stolen white BMW in the 500 block of West Wellington. The offenders disappeared by the time cops circled back. Units flood the area in an attempt to capture the suspects.

One teen is eventually taken in for questioning, but the others escaped.

Wednesday, December 14, 5:18 p.m.
About a block from where the BMW is parked, a store clerk reports that four to six offenders entered his store and stole his cellphone at Smoque Vapours, 2900 N. Broadway.

Wednesday, December 14, 5:46 p.m.
Isabella Salon reports that a group of teens came into the store and tried to rob them, but the employees managed to push the offenders out and lock the door. 444 West Fullerton at Clark Street.