Community pressure on businesses and the city to rein in Wrigleyville’s wild St. Patrick’s celebrations seems to be paying off—at least by some measures. 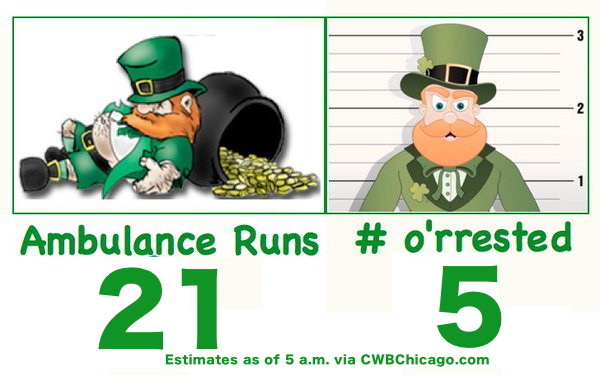 CWB Chicago estimates that “only” five people were arrested in connection with yesterday’s Green Invasion of the Clark Street bar strip.

We also estimate that 21 people were scooped up and hauled out of Wrigleyville by ambulance crews during the revelry. That’s also down from past years.

But don’t worry, America. Just because fewer people were hauled away in handcuffs or on gurneys does not mean Wrigleyville’s police scanner wasn’t poppin’ with excitement.

So, here it is. Our fourth annual recap of calls from Chicago police and fire communications in Wrigleyville for St. Pat’s.

12:50PM — The day starts with a real caper for Chicago’s finest. A Wrigleyville resident reports a suspicious person: “Male white with white hair is on the roof of their building. He’s asking a lot of questions about their air conditioning unit.” This may surprise you, but it turns out that he’s there to fix the unit. 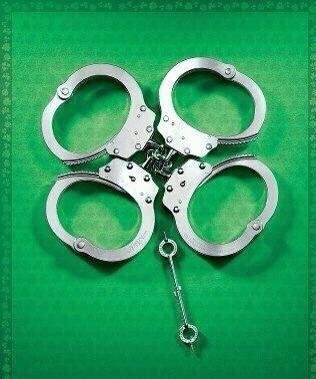 1:35PM — The first two arrests of the day are made—both at Slugger’s World Class Sports Bar. Proving itself to be “world class,” Sluggers has been the site of the first St. Pat’s arrests in two of the four years we’ve been tracking. Keep up the good work!

1:40PM — Man having a seizure after being beaten on the street. 3100 block of North Seminary. When police arrive, his friends “are claiming he fell on the sidewalk and bashed his face.” Police later determine that he was, in fact, beaten. Thanks, friends! World class!

1:45PM — The 19th police district runs out of available police officers to handle 911 calls outside of the Wrigleyville bar strip. Calls for service stack up in a backlog that will not be cleared for seven hours. The 19th district stretches from Fullerton to Lawrence and from the Chicago River to Lake Michigan.

1:48PM — A 911 call taker reports that she has “a female on phone moaning and saying she’s in Chicago, and giving the numbers to an address. It sounds like she’s in pain. She did flush the toilet a couple of times.”

2:07PM — In a delightful summary, a tactical sergeant reports that he’s “Got a guy at Dunkin Donuts who….uh….who, uh, who got his lip punched.”

2:20PM — Woman passed out in the alley behind Old Crow Smokehouse. She’s hauled off to Thorek Hospital for “detox’o’cation.”

2:25PM — After a series of challenges, the 19th district commander suspects that the district’s dispatcher is not fully informed about the day’s events: “Squad, do you know what’s going on out here?” Answer: “No, Negative.” “Squad. Squad. We got…. OK. [Sigh] I’ll call you.”

2:30PM — At Cubby Bear the 911 caller reports that a bouncer “handled a female inappropriately. Picked her up and removed her from the establishment. She wants the police.” No further information about what might be inappropriate in all of that.

3:49PM — Police learn about a fight outside of Sluggers. The “victim” is going to walk to the police station to file a report. It appears that this is the slapfest/sucker punch delight that was caught on video by intrepid videography @the1stMikeC

4:27PM — “Group of male whites throwing beer from the roof.”

4:45PM — Southport and Roscoe: Caller reports an intoxicated white man in his 20’s who’s wearing a green blazer is “looking into all the cars. He’s trying to break into a car. Drunk.”

4:53PM — “Ernest says his wife locked him out of his room. They’ve been drinking. He’ll be waiting in their garage.”

5:04PM — Another arrest. This one is also outside of Sluggers World Class Sports Bar.

5:25PM — “Male in a gray skull cap walking eastbound yelling something about ‘King killers.’”  Editors’ note: This behavior is strongly discouraged by our editorial team.

Dispatcher: “Is Merkles different from Old Crow?”
Cop: “Yeah. It’s different”
Dispatcher: “It may be the same. They both say they have a female passed out”
Cop: “They’re two different places.”
Cop 2: “All drunken idiots over here”

5:32PM — Confirmed. Merkles and Old Crow both have ladies down.

5:50PM — “Across from Wrigley Field. Male white bleeding from the face and wiping blood all over people.” [Suggestion for next year: Beef up reputation by moving this kind of thing to Sluggers World Class Sports Bar.]

6:20PM — Sergeant requests a paddy wagon to Clark and Eddy. But *not* to transport an arrestee. “We need ‘em to take a city sign into the station so these people don’t use it as a projectile.”

8:25PM — Over on Dayton Street, a frantic caller reports that a man is scaling the side of her apartment building.

8:33PM — “They’re calling back from Dayton. They know the guy who’s climbing up their building, so no police service is needed.”

11:10PM — Officer at Belmont Red Line station: “Can you send an ambulance? The guy causing this ‘disturbance’ can’t walk.”

11:43PM — “See Amit and his friends. They found a female Native American with a green jacket, jeans, and black boots intoxicated and confused” at Diversey and Mildred.

11:47PM — Speaking of intoxicated and confused: Noise disturbance on Racine. “Bunch of males playing a football game in the alley. They’re knocking over garbage cans, saying they’re getting ready for the Bears game.”

12:18AM — “Caller says an unknown male who looks like a leprechaun is ringing their doorbell violently.”

1:50AM — Something about “she jumped the curb at the Taco Bell, ran the light and is now going in and out of traffic northbound.” We missed the rest of it but thought you should know.

4:54AM — “Miss Eubanks wants police assistance. She says they were bar hopping and they can’t find her friend who’s intoxicated. She’s been circling the area for an hour and can’t find her. The friend was wearing an army green tank top with ‘University of Miami’ on it and ripped up jeans.”

Support CWB with a donation to our Tip Jar.
———-
Email us. Facebook us. Twitter us.
About CWBChicago 4360 Articles
CWBChicago was created in 2013 by five residents of Wrigleyville and Boystown who had grown disheartened with inaccurate information that was being provided at local Community Policing (CAPS) meetings. Our coverage area has expanded since then to cover Lincoln Park, River North, The Loop, Uptown, and other North Side Areas. But our mission remains unchanged: To provide original public safety reporting with better context and greater detail than mainstream media outlets.
Website Facebook Twitter YouTube