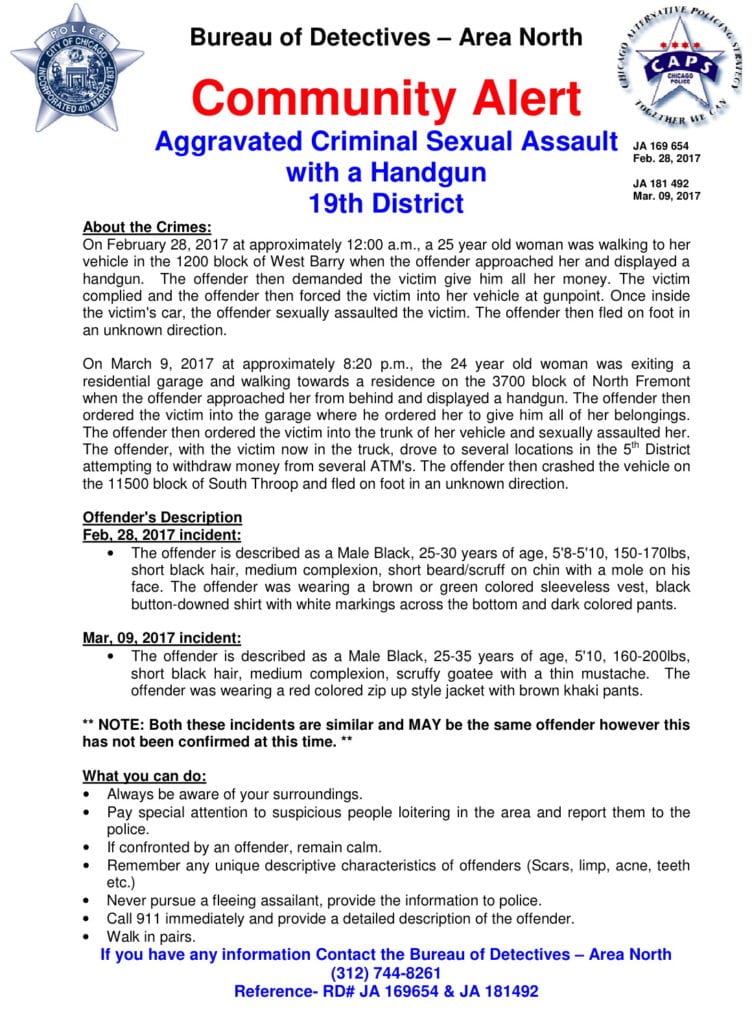 Chicago police tonight have released new details about Thursday evening’s carjacking and abduction of a woman in Wrigleyville.

Police have revealed that last night’s victim was sexually assaulted in her car before being abducted. And, for the first time, police are now saying that the incident may be related to the February 28th sexual assault of a Lakeview woman in her vehicle.

Here is the latest information:

Around 8:20 p.m. last night, a gunman confronted a 24-year-old woman as she walked out of her garage and toward her residence in the 3700 block of North Fremont Street.

The man, who approached her from behind, forced the woman into the trunk of her car and raped her, police said tonight.

With the victim in the trunk, the man proceeded to drive to the Far South Side where he tried to withdraw money from her account at several ATMs.

Tonight, detectives announced that yesterday’s attack is “similar and MAY [involve] the same offender” as the February 28th attack.

In that case, a woman was walking to her vehicle in the 1200 block of West Barry around midnight when an unknown man raped her at gunpoint after forcing her into her vehicle.

The February 28th attacker is described as a black man between 25- and 30-years-old, 5’9” tall, about 160 pounds, with short black hair, and a medium complexion. He had a short beard or scruff on his chin and a mole on his face. He was wearing a brown or green colored vest, a black button-downed shirt with white markings on the bottom and dark colored pants.

Last night’s gunman is described as a black man between 25- and 35-years-old, 5’10” tall, who weighs 160 to 200 pounds. He has short black hair, a medium complexion, and a scruffy goatee with a thin mustache. The man was wearing a red colored zip-up style jacket with brown khaki pants, police said.

• Always be aware of your surroundings.
• Pay special attention to suspicious people in the area and report to the police.
• If confronted by an offender, remain calm.
• Remember any unique descriptive characteristics of suspects (Scars, limp, etc.)
• Never pursue a fleeing assailant, provide the information to police.
• Call 911 immediately and provide a detailed description of the offender.
• Walk in pairs.

Anyone with information about these incidents is asked to call Area North investigators at 312.744-8261