Businesses across Lakeview have been buried in a blizzard of fake $100 bills over the past two weeks. Now, CWBChicago has identified a serial number connected to at least two cases and—thanks to local merchants—we’ve collected images of the fake bills and three suspects.

In recent weeks, two different businesses have been handed fake $100 bills with the serial number HB69416277J. So you’ll definitely want to avoid those. Most recently, a bill with that serial number was passed at La Gondola restaurant, 2914 North Ashland, on Saturday afternoon.

For La Gondola owner Andrew McGuire, Saturday’s attempt was the fourth time that someone tried to pass a fake $100 at the restaurant this summer.

“They always come in fast on their phones talking like they’re in a hurry, order something small and pretend like they have a wad and hand you an old $100,” he said.

Also hit on Saturday afternoon was Taboo Tabou at 843 West Belmont. A man and a woman walked in and “worked it together,” owner Alexis Thomas said.

Thomas sent along this video of the pair:

Alexis’ father, long-time Lakeview retailer Mark Thomas, is offering a $1,000 reward to anyone who turns the couple in, she said.

“Also, point out they are assholes because they totally sucked as humans beyond the fake money,” she said. Can do, Alexis. Can do.

Even Trickier Than They Appear 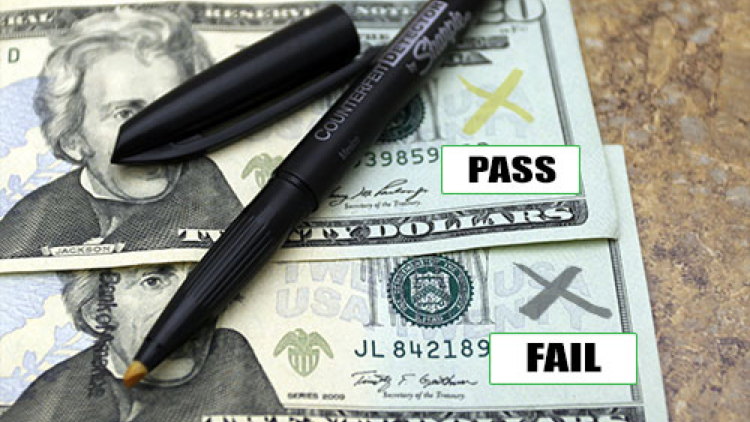 Special markers designed to detect fake U.S. currency are no longer reliable, McGuire said. Ink from the markers turns yellow when it touches money and black when it touches non-currency paper. But the criminals have found a way around that.

“They’re bleaching [genuine] $5 bills and printing $100s on them,” McGuire said. So, while the paper tests true, the denomination that’s been printed on it has changed.

Modern U.S. currency has a variety of images embedded into the notes themselves. Given the advanced efforts of today’s cheats, the best way to test a suspect bill may be to look for those embedded watermarks.