At least four robberies were reported in Lakeview and nearby Lincoln Park within 70 minutes Thursday evening. A fifth mugging took place in Lakeview earlier in the day.

The four evening robberies appear to be the work of two separate robbery teams.

If yesterday’s activity is any indication of what lies ahead, the area could be seeing a second consecutive weekend of wide-spread muggings and assaults.

Here are a map and a run-down of yesterday’s incidents: 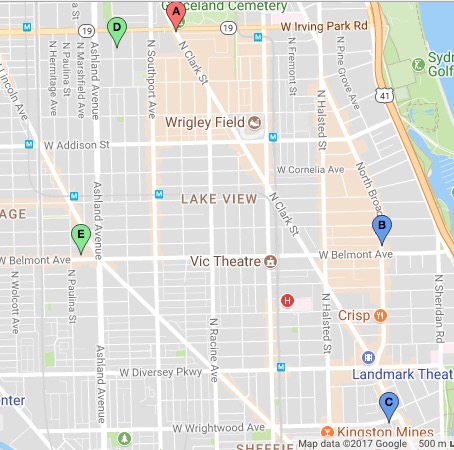 A – 1300 block of West Irving, 1:25 p.m.
An apparent pocket-picking escalates as a woman is targeted while stepping off of an eastbound CTA bus near Irving Park Road and Clark Street.  The woman told police that a man reached into her purse as she stepped off the bus, but things escalated and a struggle ensued. When the bus drove off, the man was still onboard with the victim’s wallet. He is described as black, 35- to 40-years-old, about 5’7” tall, and 170 pounds. He was wearing a black jacket and may have had a female accomplice.

B – Near Belmont and Broadway, 9:50 p.m.
A robbery victim is transported to Thorek Hospital after he is beaten up by three offenders.

C – 600 block of West Wrightwood, 10:50 p.m.
Three offenders matching the description of the Belmont-Broadway attackers rob a woman near her home. They imply that they have a weapon and take the victim’s purse, phone, and keys. All three are last seen running southbound.

The three are described as young black males: Two are about 6’3” tall and the third is about 5’5”. One of the taller men wore a black hoodie while the short suspect wore a blue hoodie. The victim’s credit card was used about an hour later at a gas station near the DePaul University campus, police said.

D – 3900 block of North Greenview, 10:40 p.m.
Two men approached the victim on the street and demanded his valuables at gunpoint, police said. One offender had a 9-millimeter handgun while the other appeared to have a fake revolver, the victim reported. After getting the man’s wallet and phone, the robbers fled westbound in an alley and jumped into a black sedan.

E – 1600 block of West Belmont, 10:59 p.m.
The same pair involved with the previous incident is believed to be responsible for robbing a woman of her phone and debit card near Belmont and Paulina. Both men fled northbound on Paulina after the robbery. They are described as Hispanic men in their early 20’s. One wore a light blue hoodie with a baseball cap and glasses. He’s about 5’10” tall and has a medium build. The other is shorter, skinny, and wore a baggy black sweatshirt, with baggy jeans. He had a goatee and short hair.