A man who has been banned from entering the Center on Halsted due to his behavior was arrested last weekend for violating the ban and attacking an employee at the massive LGBTQ service agency.

22-year-old Brian Henderson of the Auburn-Gresham neighborhood entered the center around 11 a.m. last Sunday and tried to steal an item from the reception counter, police said. He proceeded to push or punch a 64-year-old employee, causing the man to fall to the ground and suffer injuries to his head, right forearm, and face, according to police.

Police arrived and took Henderson into custody. The victim was treated at Thorek Hospital.

Henderson was charged with battery and criminal trespassing before being released on a $1,500 recognizance bond.

Henderson reportedly returned to the Center on Halsted again Thursday evening, but it was not immediately clear if police arrived in time to arrest him.

All in all, it looks like the Center on Halsted has had a change of heart about whether or not they want to co-operate with the police.

Last March, officers who pursued a theft suspect into the service center were told that they would need to get a warrant if they wanted to access the property.

One year ago, CWBChicago reported that center leadership had flat-out lied at community meetings when they said center representatives regularly appear in court when the agency or its employees fall victim to crime.

In fact, the center only appeared for one out of twenty-six court cases since 2013.

After an “intervention” by local police leadership and Alderman Tom Tunney, the center agreed to show up in court.

Records show that center representatives have shown up for five out of seven cases between November 2016 and August. The agency no-showed for Donovan Mylander in its most recent case.

We’ll be sure to keep you in the loop on the Henderson story.

Here’s a look at how the Center on Halsted has been doing since it promised local leaders that representatives would appear in court when the agency or its employees fall victim to crime. All information is based on Cook County Criminal Court records. 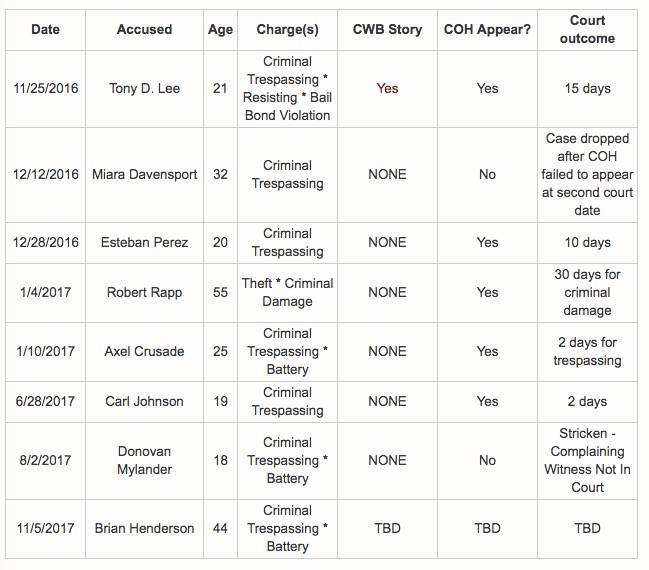