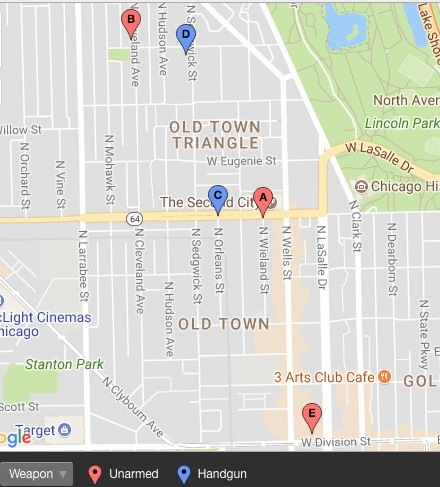 For the second time in just over a week, Chicago police are warning about an outbreak of evening time robberies in the Old Town neighborhood. The latest alert comes after yet another robbery was reported Monday evening in the area.

According to a police department source, investigators believe that two robbery crews are responsible for the muggings—one crew is armed with handguns, the other resorts to physical violence to complete their crimes.

Shortly after 6 p.m. on Monday, a man reported that two robbers backed him into a corner in the 1200 block of North LaSalle. His was at least the fifth known hold-up in Old Town since January 14.

The latest alert specifically warns about three robberies that cops have connected to the apparently unarmed robbery team. In these cases, offenders have approached victims, and either grabbed them or pushed them to the ground before taking property. All of the cases have been connected to a white Nissan Maxima get-away car, the alert said.

On Sunday, armed robbers fired a shot at two people they had just robbed in the 1800 block of North Sedgwick, police said. Just after 10:30 p.m., two men emerged from an SUV and approached a man and a woman who were walking. The robbers demanded the victims’ property while displaying a handgun, police said.

Please support CWBChicago’s original reporting by becoming a member or making a donation to our operating fund.

The male victim, 26, handed over cash. As the robbers returned to their vehicle, one of them fired a single shot at the couple, but did not strike anyone.

On January 20, a 37-year-old man was walking in the 1600 block of North Orleans when three or four men exited a gold vehicle and approached him with a handgun. The crew took the man’s wallet and phone, then asked for the victim’s PIN. He gave them a fake one and they took off.

About 15 minutes later, a man and woman were robbed near Boystown in the 3100 block of North Broadway. Police said the 25-year-old man and 24-year-old woman were walking when a silver or gold four-door sedan pulled up and three men emerged. At least one of the men had a handgun, police said. Investigators are still trying to determine if the Broadway hold-up is connected to the Old Town incidents.