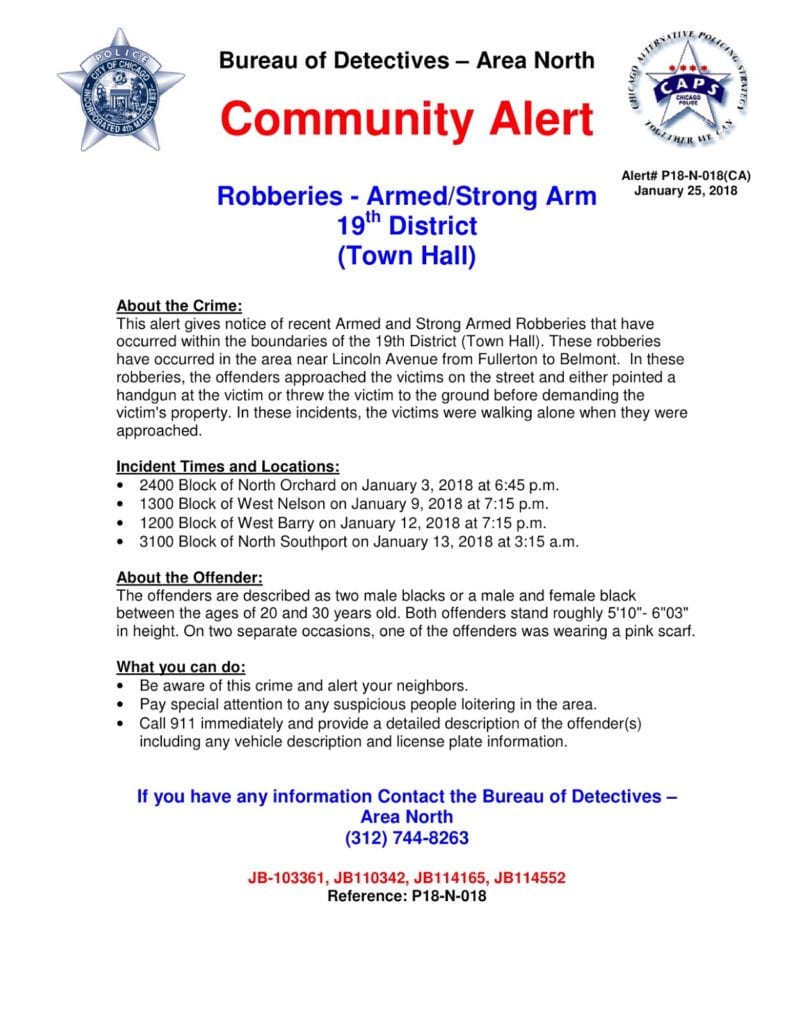 Area North detectives today released a seemingly tardy warning to the public about a series of robberies in Lakeview and nearby Lincoln Park earlier this month.

The hold-ups occurred between January 3 and January 13 in a concentrated area near Lincoln Avenue between Fullerton and Belmont, the alert said. Offenders in the robberies approached victims on the street and either pointed a handgun at the victim or threw the victim to the ground before demanding valuables. All of the victims were alone at the time of the robberies, police said.

Of eight robberies that were reported in the area during the time period, detectives believe four of them are related to each other. (Click for CWB’s original reports on each incident.)

According to the alert, the suspects are two black men or a black male with a black female between the ages of 20- and 30-years-old. They stand 5’10” to 6’03” tall. During two of the muggings, one offender was wearing a pink scarf.

Anyone with information about the cases is asked to call police investigators at (312) 744-8263.

We tell you about crime patterns before the police. Why not subscribe to CWB to help us cover our costs? We’d really appreciate it! Click HERE.
———-
Email      Facebook       Twitter       YouTube
About CWBChicago 4360 Articles
CWBChicago was created in 2013 by five residents of Wrigleyville and Boystown who had grown disheartened with inaccurate information that was being provided at local Community Policing (CAPS) meetings. Our coverage area has expanded since then to cover Lincoln Park, River North, The Loop, Uptown, and other North Side Areas. But our mission remains unchanged: To provide original public safety reporting with better context and greater detail than mainstream media outlets.
Website Facebook Twitter YouTube