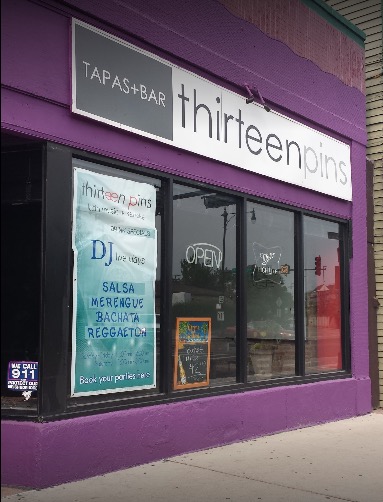 A North Side restaurant and bar served liquor for three years without a state license and nobody seemed to notice until CWBChicago ran a story about one of the purported owners being arrested in a methamphetamine bust last month.


We noted in our story that “an online search of state liquor licenses did not turn up any hits for Thirteen Pins or its street address.” We didn’t think much more about the missing license information. But reporters at Nadig Newspapers were curious. What they found—detailed in the story below—is enough to infuriate anyone who’s sick of paying more and more in taxes for a city government that can’t shoot straight.


Nadig Newspapers has been covering Chicago’s Northwest Side neighborhoods since 1940. The following is republished with permission.

The restaurant’s state liquor license reportedly expired Feb. 28, 2015, and was not renewed. Under state law, liquor establishments are required to have both state and municipal licenses, but Thirteen Pins served liquor for nearly 3 years without the required state license and despite several city licensing violations.

The department apparently was unaware that the restaurant’s state license had expired until media inquires were recently made following the drug-related arrest of a man who reportedly told police that he owned the restaurant. The suspect was arrested after police raided a North Side home in connection with a report that a package with alleged methamphetamine had been delivered to the home, according to police.

The recent cease-and-desist order was issued due to the lack of a state license, and no liquor can be on the premise, but the restaurant could continue to serve food, Brugh said. A sign posted at the restaurant states that it is closed for vacation.

The 17th (Albany Park) Police District and the Chicago Police Department’s Vice Unit have been informed of the order and can check the premises to make sure that liquor is not being served if the restaurant were to re-open, Brugh said.

The alderman’s office has been addressing residents’ complaints about the restaurant since 2014 and it is frustrating that the department did not issue the cease-and-desist order related to the lack of a state license nearly 3 years ago, Brugh said. The state issues liquor licenses primarily to facilitate with the collection of sales taxes and other revenue associated with the sale of alcohol.

Brugh said that “moving forward” there should be a mechanism in place in which municipalities are informed when a state license lapses and that the city should be conducting a thorough inventory of all required licenses for problem businesses.

Since 2014, the restaurant has been cited for failure to display or produce current dram shop insurance, a dissolved corporation, prohibited activity, operating without a tavern license and operating after a cease-and-desist order, according to the business affairs department. Some of these reported violations occurred after the restaurant’s state license had expired, but the city allowed the restaurant to resume liquor sales after being ordered to close for seven or 10 days, according to records released from the business affairs department.

The restaurant has a city incidental liquor license, which requires the primary source of revenue to be from non-alcohol sales.

An eviction lawsuit against the restaurant was filed earlier this month.

The business affairs department did not immediately respond to questions about the reported cease-and-desist order.