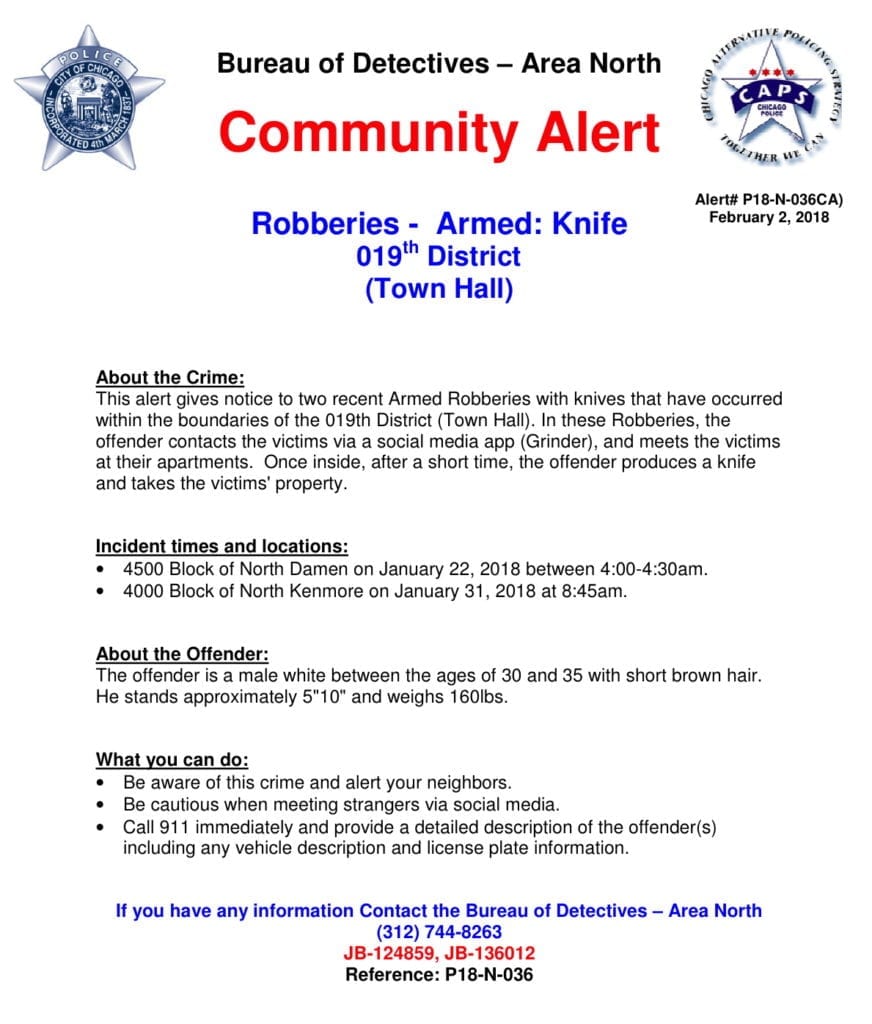 Detectives have just issued a community alert warning North Siders of a man who has twice robbed victims after meeting them on the gay social app Grindr.

CWBChicago told you about these cases on January 23 and this past Wednesday.

In both cases, the offender has contacted victims via Grindr and then agreed to meet them at their apartments. Once inside, the suspect pulls out a knife and takes property from the victim, police said.

Police urged residents to be cautious when meeting strangers via social media.

The alert described the man as white between 30- and 35-years-old with short brown hair. He stands about 5’10” tall and weighs 160 pounds, police said. (More detailed descriptions offered by the victims are published below.)

Anyone with information about the suspect is asked to call Area North Detectives at (312) 744-8263.

As CWB reported exclusively on January 23, two male roommates were robbed at knifepoint in their Lincoln Square on January 22 after inviting a man over via Grindr. Police said the robber told the victims that he was homeless, although it is not clear if that information was revealed before or after he arrived at the home.

Once he was inside the apartment, the robber went to the bathroom and emerged brandishing a large kitchen knife, a police report said. He demanded that the man who invited him over and his roommate surrender their wallets. But both of the victims—one age 36, the other 44—claimed to not have any money. A scuffle erupted and the offender took a gray coat as he headed for the door, police said. No one was injured in the robbery.

The victims described the offender as a white man 25- to 30-years-old with a receding hairline, a dark skull cap, a dark coat, a dark backpack, and blue jeans. He wore a white t-shirt with red and gray lettering on the front and spoke with a Southern accent, the victims said.

From our original report on Wednesday morning:

Just after 9 o’clock Wednesday, motorists reported seeing a naked, bloody man running in traffic near the intersection of Kenmore and Irving Park Road on the border of Uptown and Lakeview, police said. The man, said to be distraught and difficult to understand, ran into the Thorek Hospital emergency room where medical personnel began treatment.

According to the 32-year-old victim, he met a man by the name of “Teej” on a hook-up app and invited him to his apartment in the 4000 block of North Kenmore where methamphetamine was reportedly ingested. At some point, the offender brandished a large knife and chopped off one of the victim’s fingers, police said.

The severed digit was saved and has been re-attached, according to police.

“Teej” is described as a white man between 30- and 35-years-old, 6-feet tall, and 165 pounds with a brown backpack. He reportedly resembles Jesus Christ with a scruffy beard and brown hair.

Officers who saw surveillance footage of the offender described him as white, 30- to 35-years-old with a short beard, a dark baseball cap worn backward, brown leather coat, blue jeans, white and black gym shoes, carrying a blue backpack and a brown bag that may be a second backpack.
Sponsor CWBChicago for as little as 94-cents a week to receive members-only reports and services.