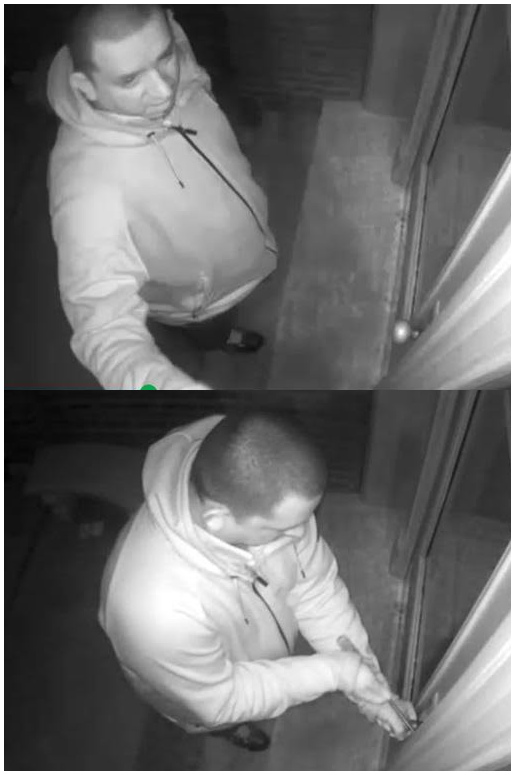 One of CWB’s Lakeview readers sent along these pix of what appears to either be an uninvited late-night door lock repairman or a burglar at work over the weekend.

The man seen here was captured on a homeowner’s surveillance system in the 4100 block of North Greenview early Saturday morning, our reader said. This particular break-in failed, we’re told.

We just thought you might want to have these pictures handy in case, you know, you need to have any doors “screw drivered” at odd hours.

Police last week arrested 30-year-old Martell Orozco at his home in the 4600 block of North Racine after a man allegedly captured Orozco stealing from an apartment after using an old key to access the unit.

Orozco used to paint for the victim’s apartment building, the landlord said, “but he was fired and returned his copy of the master key” at the end of October, according to police. (TIP: Employees should *never* have their own copies of master keys.)

Soon after Orozco was let go, a tenant in the building began noticing that “various alcohol” including his $50 bottle of tequila had gone missing. The victim set up cameras, and he twice captured footage of Orozco entering his apartment to drink booze and take items from the fridge, according to police.

Police said they watched the video and it showed Orozco “entering the apartment with a key and placing a bottle in his pocket.”

Orozco has been charged with one count of criminal trespass to residence. He’s free on a recognizance bond by standing rule of the court.

Burglary reports are down in many areas of the North Side so far this year, with Lincoln Park standing alone as the one neighborhood experiencing a substantial uptick. Here’s a comparison of the number of reported burglaries in each community area between January 1 and February 8 of 2017 vs. this year.

Original reporting seen nowhere else. Please support our work by contributing to the CWBChicago operating fund. Donate $49 or $5 a month to receive a year’s worth of exclusive reports and services.
———-
Email      Facebook       Twitter       YouTube
About CWBChicago 4363 Articles
CWBChicago was created in 2013 by five residents of Wrigleyville and Boystown who had grown disheartened with inaccurate information that was being provided at local Community Policing (CAPS) meetings. Our coverage area has expanded since then to cover Lincoln Park, River North, The Loop, Uptown, and other North Side Areas. But our mission remains unchanged: To provide original public safety reporting with better context and greater detail than mainstream media outlets.
Website Facebook Twitter YouTube