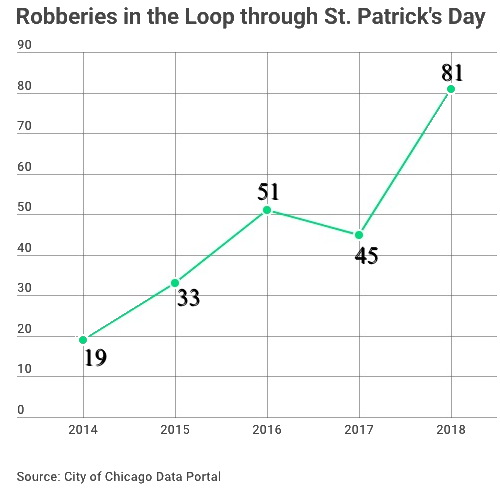 The official Chicago Police Department Twitter account shared some exciting news for the Loop this weekend: “So far this year, robbery arrests are up by 10% as we continue targeted robbery suppression efforts.”

The department failed to mention that robberies in the Loop are also up: by 80% year-over-year and by 326% compared to 2014. Their brag about robbery arrests being up 10% is a standard PR play that Chicagoans have been subjected to under the administration of Rahm Emanuel. Robberies are up 80%? Ignore that. Let’s talk about arrests being up 10%.

To be sure, cops working the Loop have made important robbery arrests over the past week.

Around 5:30 p.m. on Saturday afternoon, five male friends found themselves surrounded in a parking garage stairwell by three offenders who brandished two firearms, police said. The victims turned over their valuables and the robbers fled from the garage at 8th and Wabash.

A 17-year-old male juvenile was charged with one count of felony armed robbery. No further information is available about the minor because he is shielded by law.

Early Friday, police arrested 24-year-old Caezer Teron after he allegedly mugged a woman on a Loop train platform. Teron has been charged with carrying out a total of three robberies in the Loop this year.

Last Tuesday, 57-year-old convicted felon Preston Gresham was arrested after he robbed a Loop donut shop. He, too, has been charged with carrying out three Loop robberies this year.

But it seems as fast as cops make arrests, more robberies are being reported downtown.

DePaul University issued an alert for its Loop campus last week after three unknown men approached a male victim on the corner of State and Jackson around 3 p.m. on March 18. One offender displayed a handgun as another member of the crew “stated to the victim ‘You are lucky there is a camera here.’ The offenders then fled in an unknown direction.”

On Friday, a man was pinned to the wall and robbed at the Jackson Red Line station around 1:30 a.m., police said. The offender immediately jumped on an incoming northbound train and escaped. He is described as black, 6-feet tall, wearing a dark knit cap, a dark hoodie under a greenish-gray and orange jacket, and jeans with a white design on the back.