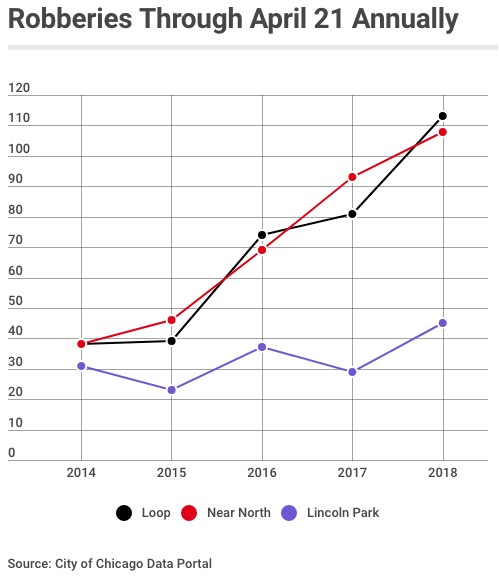 The Near North neighborhood, which includes Streeterville, the Magnificent Mile, and River North has seen a more modest 16% year-over-year increase in muggings. The five-year-trend is an ugly 184% increase.

And the cushy Lincoln Park neighborhood saw a 55% increase in robberies through April 21 with the five-year trend being up 45%.

Among the more recent incidents:

• Around 7:30 last Tuesday, a woman was slammed into a Starbucks window by an offender who stole her phone and purse at 38 East Ontario. The suspect ran eastbound and jumped into the back seat of a black GMC Envoy or Trailblazer. A witness told CWBChicago that the woman “was attacked from behind for her phone….Starbucks worker said this is a frequent occurrence. The guy who did it was an African-American male, 20-25, lighter skin complexion. The getaway driver was a skinnier black male with mid-length dreads.”

• Also on Tuesday evening, the Michigan Avenue Best Buy store was robbed of cellphones by two teenagers who were armed with knives. Police said the two offenders entered the store and a manager immediately asked them to leave because it was closing time. The offenders refused, displayed a knife, and removed four or five phones from the store before running away. The robbers were described as two black males between 14- and 16-years-old.

• A victim was robbed of cash in the 1400 block of North Halsted by three men armed with a handgun around 3:20 a.m. on April 16. Offenders were said to be three Hispanic men ages 20 to 25. One wore a black hoodie, one wore a red Bulls hat, and the third wore a white jacket and covered his face with a black hat, the victim said.

• A woman on her way to work was assaulted and robbed by a man near the Red Line entrance at State and Lake Street. The offender struck the woman in the face, shoved her, and took her phone. Police said the victim was a black male in his late teens with dreadlocks. He stands about 6-feet tall, weighs 170 pounds, and wore a dark gray hoodie with the hood up and ripped blue jeans. He was last seen running northbound on State Street.