An ATM technician alerted police Wednesday evening after he saw a skimming device attached to a cash machine at the Armitage Brown Line station, 944 West Armitage. The worker discovered the data-sucking device while servicing the machine around 4:30 p.m.

It is the second skimmer to be found on the North Side since suspected skimming guru Marius Manolache skipped bail on March 12. Today’s skimmer is the first to be seen on CTA property since February 2017.

Skimmers are small devices that criminals plant on ATMs to secretly capture users’ banking information and PINs. After allowing the sneaky contraptions to collect data for a period of time, fraudsters return to the ATM, collect the skimmers, and then create fake ATM cards using the captured data.

In February, cops found 42-year-old Manolache withdrawing cash from an Avondale ATM with a stack of homemade debit cards, according to charges. Each fraudulent card had the victim’s PIN written on the back. The PINs and embedded card numbers were captured earlier by skimming devices, prosecutors allege.

Manolache was living in a hotel room near Clark and Diversey at the time of his arrest. Cops who arrested him said he had seventeen fraudulent debit cards and $3,040 worth of $20 bills in his pockets.

Prosecutors charged him with felony burglary, felony aggravated identity theft of a person over age 60, and felony theft of identity from more than three victims. Judge Sophia Atcherson ordered him to surrender his Romanian passport and set bail at $5,000. Manolache—a man with $3,040 worth of twenties in his pocket—easily posted the $500 deposit to walk free. He was never seen again. A warrant has been issued for his arrest. 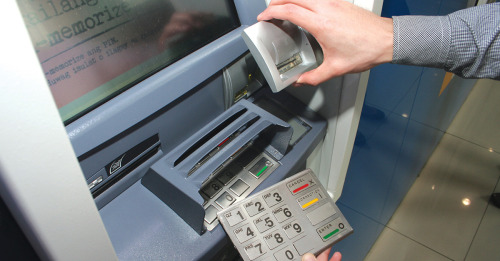 A Chicago police officer who reads CWBChicago has offered some new tips to help you steer clear of skimmer trouble:

“If you use an ATM in a bank after hours, you can use any card with a magnetic stripe to enter the vestibule. Use an expired card,” she suggested. “Then, before you put your real car in the machine, pull on EVERYTHING!! The keypad, the slot that you put your card in, etc. Nothing should come loose. If it does, call the police r alert the bank. Last but not least, cover your hand when you enter your PIN.”

Please support our efforts to uncover original news in Chicago. Subscribe or donate an amount of your choosing today. Thank you!