Around 7:20 on Thursday evening, Chicago Police Deputy Chief Kevin Ryan stood at the scene of a shooting and attempted carjacking in the 1400 block of North Inner Lake Shore Drive. He spoke to gathered TV reporters:

“I’ve been working downtown since 2006. I take this very personally,” he said. “It is safe down here. If you come down here to do this, you’re gonna get caught.”

Less than 20 minutes later and one block away, an Amazon delivery driver was carjacked at gunpoint. The offender remains at large.

Ryan was talking to the media after an armed man shot three people and carjacked four others in a crime spree that stretched from the West Side through the Gold Coast.

But minutes after he boasted that downtown criminals would be caught, another one got away just a block from where Ryan spoke. 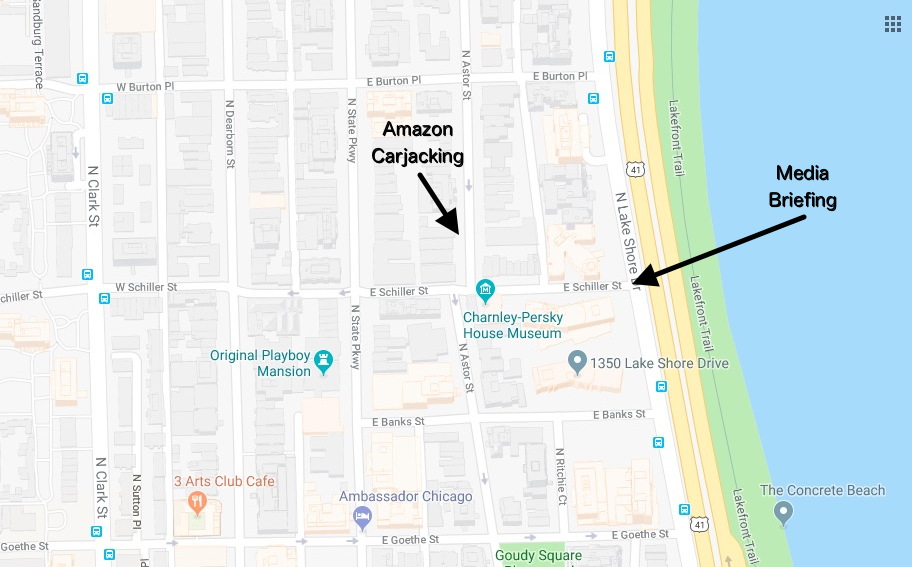 Police today confirmed that a 26-year-old Amazon worker was confronted by a gunman and robbed of his delivery van at 7:35 p.m. Thursday in the 1400 block of North Astor. Cars with bullet holes and crime scene tape still decorated several Gold Coast streets as the second robbery went down.

The Amazon worker told police that he exited his van to make a delivery when a black male in his late 30’s approached and displayed a handgun. The victim, who was not injured, backed away as the offender jumped into the van and sped off. The vehicle was last seen heading westbound on Schiller, police said.

Police said the carjacked vehicle is a white minivan with New York license plate HJF3470. It has the word “Scooby’s” adhered to the back. The offender was wearing a navy hat and a black jacket, according to the victim.

Police today said the Astor Street carjacking took place at approximately 7:51 p.m., but dispatch records show the first call about the incident was dispatched 15 minutes earlier. No one is in custody and Area Central detectives are investigating, police said.

Charges against the man who carried out the earlier crime spree were announced by federal prosecutors today.