If they are not careful, Chicago Tribune readers may suffer headline whiplash this morning. Somehow, someway, the newspaper’s assessment of what happened downtown over Memorial Day weekend changed from “mayhem” to “peace.” 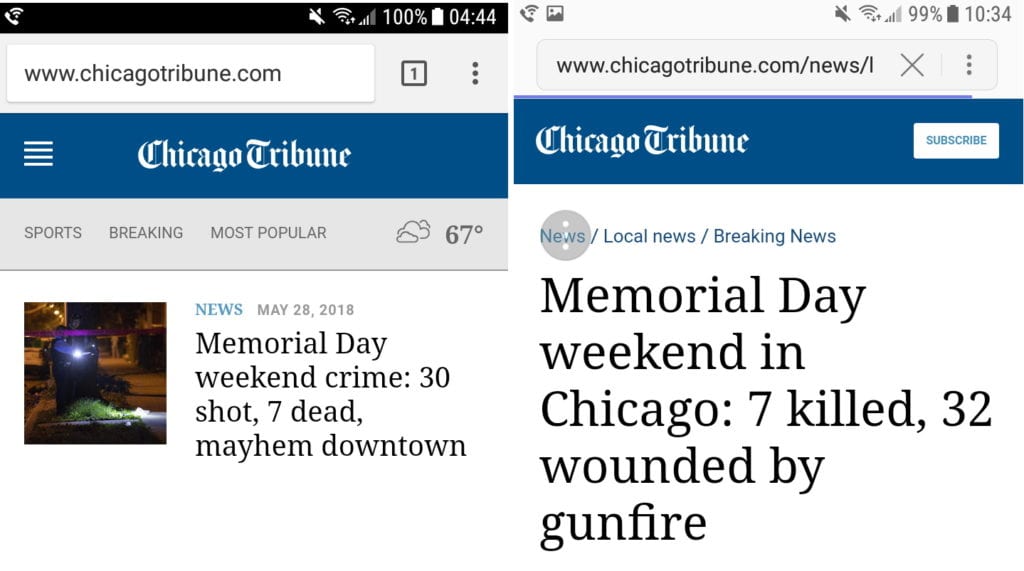 At sunrise yesterday, the Trib’s web headline was “Memorial Day weekend crime: 30 shot, 7 dead, mayhem downtown.” By midday, the reference to mayhem had been removed from the story’s headline. The time-stamped screenshots above tell the tale.

The Illinois House of Representatives this weekend passed a watered-down version of an “anti-carjacking” law favored by Mayor Rahm Emanuel and CPD Superintendent Eddie Johnson. The bill now goes to the Senate.

Still in the amended bill is a clause that…would allow police and prosecutors in many cases to infer “from the surrounding facts and circumstances” that the passengers did know [a car was stolen], and charge them with being in possession of a stolen vehicle.

Axed, Hinz said, was a clause that would allow juveniles to be held for up to 40 hours and “potentially declared delinquent and sent to a juvenile treatment facility.” Those potentialities would only apply to juveniles who, if they were adults, would be charged with carjacking and note mere possession, Hinz wrote.

Despite the reduced powers of the approved bill, Lincoln Park Alderman Michele Smith (43rd), who had been pushing for the tougher law, declared success: “These are overdue changes necessary to staunch the wave of hi-jackings [sic] in our city.”

Question: How do you keep cabbies and ride-hailing drivers from attacking and sexually assaulting their passengers? You create a bunch of paperwork, of course.

Aldermen Ed Burke (14th) and Anthony Beale (9th) last week proposed an ordinance that would require Uber, Lyft, and taxi companies to file quarterly reports with the city about the number of their drivers who’ve been accused of sexually assaulting or violently attacking passengers.

The aldermen believe that a “clearinghouse” of information is needed so the prevalence of such attacks are known.

If the ordinance passes, details of the quarterly reports, including specifics of the allegations, would be posted on a city website.

Back CWB’s reporting team and we’ll reward you with members-only reports and services all year long. Join HERE for just $49 a year or $5 a month.
———-
Email      Facebook       Twitter       YouTube
About CWBChicago 4363 Articles
CWBChicago was created in 2013 by five residents of Wrigleyville and Boystown who had grown disheartened with inaccurate information that was being provided at local Community Policing (CAPS) meetings. Our coverage area has expanded since then to cover Lincoln Park, River North, The Loop, Uptown, and other North Side Areas. But our mission remains unchanged: To provide original public safety reporting with better context and greater detail than mainstream media outlets.
Website Facebook Twitter YouTube