Crime aboard the CTA and on its properties is on the rise in 2018, the third consecutive annual increase on the transit system, according to CWBChicago analysis of the city’s crime and transit data.

A similar increase in violent crime on CTA is being driven not by muggings, but by aggravated batteries—violent incidents that leave victims seriously injured but not robbed. Like the vicious June 14 punch aboard a train that left a senior citizen blinded in one eye and the June 1 case in which a woman was pushed onto the Red Line tracks at Belmont.

What’s more, CTA’s longer-term on-paper crime “reduction” is driven not by a decrease in crime, but by the Police Department’s decision to virtually eliminate the “crime” of fare-jumping and to substantially reduce narcotics arrests.

• Despite declining ridership, CTA crime is up in 2018, the third straight increase.

• Violent crime peaked during the Great Recession, but continues at a rate significantly higher than pre-recession years.

• Aggravated batteries like the June 14 attack on a senior citizen hit the highest level on record in 2017. They’re up again this year.

• Through May, CTA crime this year is up 18% over last year

We decided to look into Moore’s claim about CTA crime being down considerably. After we shared some of the results with his office, Moore declined to comment via a staff member.

Crime IS Down — On Paper

Looking strictly at the bottom line number of “crimes” reported on the CTA annually, 2017 recorded among the fewest crimes of any year since 2002 (although 2017 was significantly higher than 2015 and 2016).
But CTA is benefitting greatly from a decision made by the police department in mid-2014. That’s when CPD ordered transit officers to stop arresting fare-jumpers. Instead, people who boarded buses and trains without paying would be issued tickets. The effect on “crime” was immediate.
In 2012, the last full year that fare jumpers were arrested, there were 1,900 fare evasion cases on CTA. Last year, there were 103.  This graph shows the bottom falling out on fare jumping “crime”: 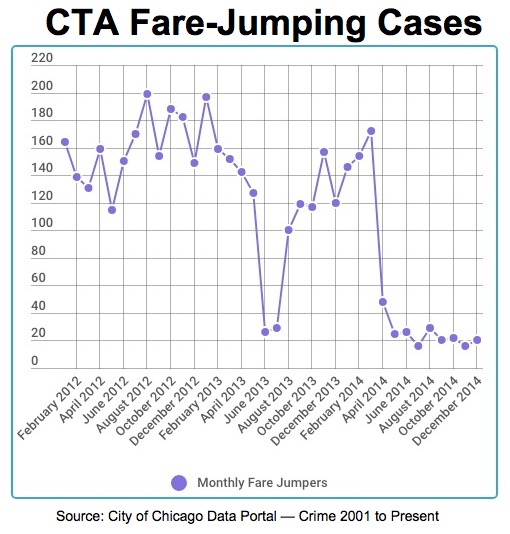 In New York City, the Manhattan District Attorney announced in February that his office would no longer prosecute fare-jumpers. New York cops will handle fare evaders with summonses only.
Also driving down the CTA’s on-paper crime reduction is a dramatic decrease in narcotics arrests on the transit system. The reduced enforcement of drug laws is in line with a similar enforcement drop seen citywide. 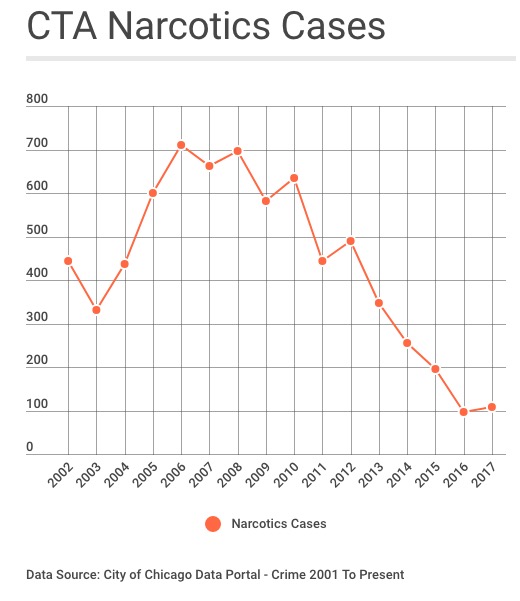 The story that we’re about to tell is how the CTA’s crime performance looks when behind-the-scenes manipulations are removed. This graph will get us started: 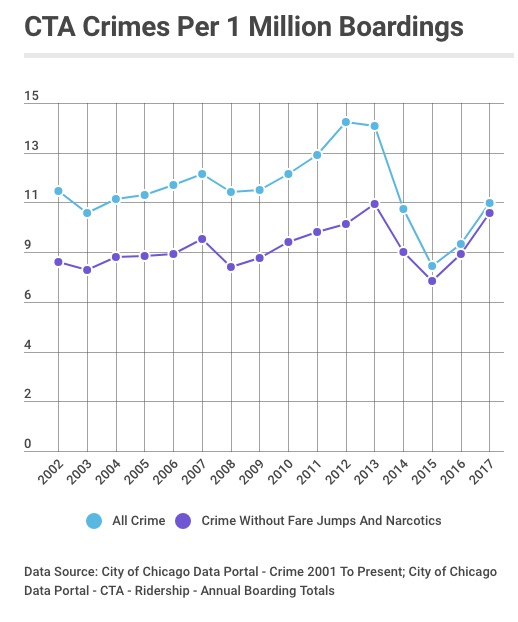 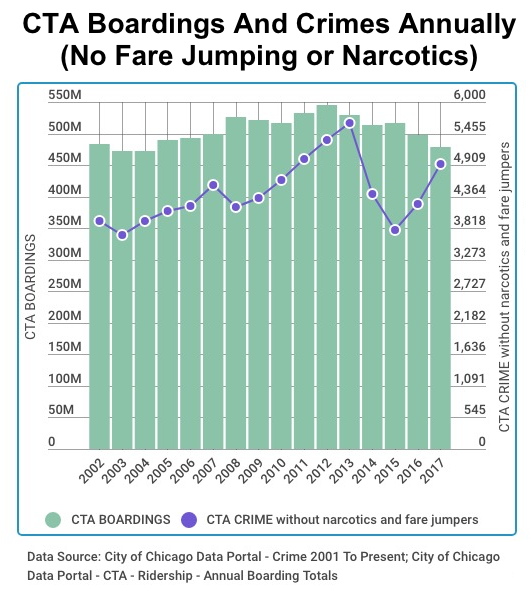 The CTA experienced a sharp increase in violent crime during the Great Recession.  The “violent crime” category includes robberies and aggravated batteries in addition to less-frequently seen homicide and criminal sexual assault cases.
The recession peak, driven by a significant increase in robbery cases, has been pushed back. Nonetheless,  violent crime has been on the increase again since 2015. Last year, CTA violent crime rose above pre-recession levels. 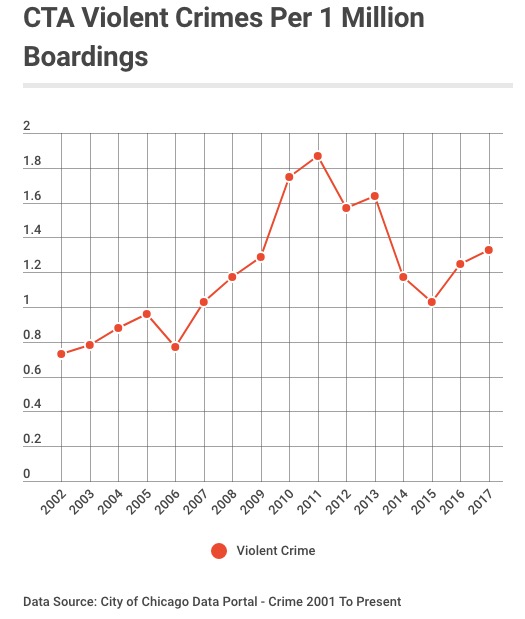 The number of violent crime cases has continued to increase during 2018. The increases have been recorded despite declines in ridership.
In 2017, CTA recorded more aggravated battery cases than any other year in the study. These are cases like the woman being punched on the train, persons being pushed onto train tracks or thrown down stairs, and other cases that cause serious injury. Last year saw a 67% increase in “agbat” cases over 2016. About one-third of the aggravated battery cases were reported on trains, platforms, and CTA stations. 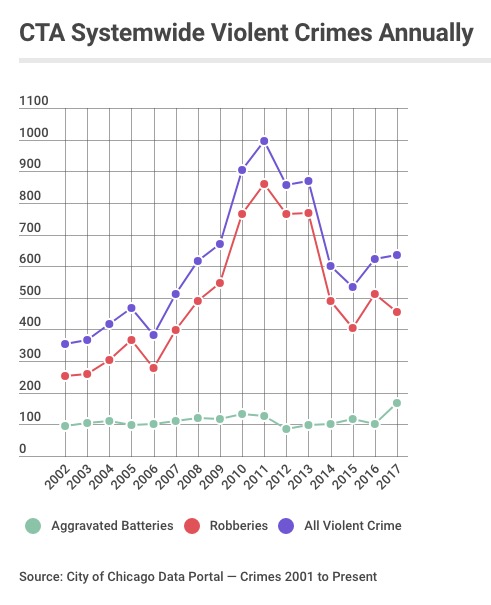 Robbery reports are down sharply from recession-era levels. Nonetheless, hold-ups continue to be reported in numbers higher than before the economic downturn. 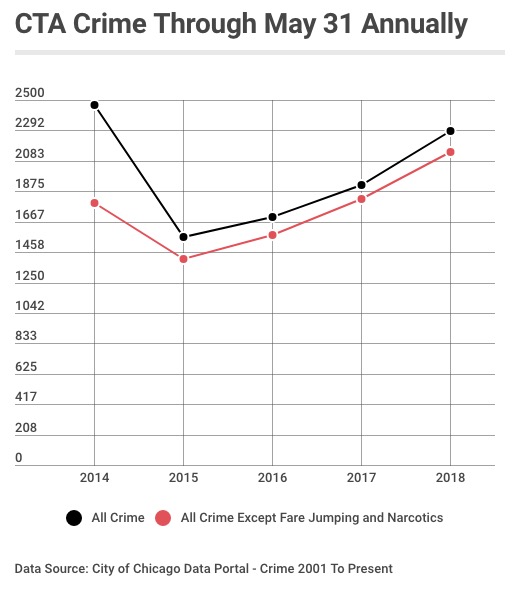 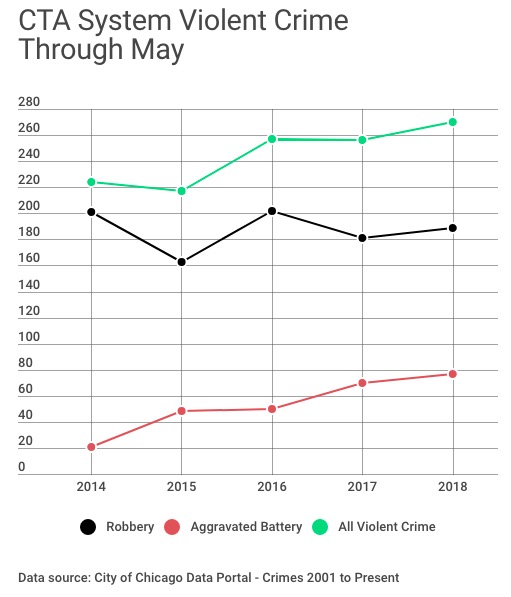 CTA spokesman Steve Mayberry said the agency, “always works to identify and address any crime or wrongdoing that occurs on our system, and CTA always contacts police when needed. Additionally, we always encourage customers to report any incident of wrongdoing.”
Mayberry directed us to the Chicago Police Department as “CTA is not a law enforcement agency and does not have its own internal police force.” The police department did not respond to our inquiry.
Support CWB’s original reporting to receive members-only analysis and services year-round. Subscriptions start at $49 a year or $5 a month. You can also one-time donate an amount of your choosing. Click here — and THANK YOU!
———-
Email      Facebook       Twitter       YouTube
About CWBChicago 4360 Articles
CWBChicago was created in 2013 by five residents of Wrigleyville and Boystown who had grown disheartened with inaccurate information that was being provided at local Community Policing (CAPS) meetings. Our coverage area has expanded since then to cover Lincoln Park, River North, The Loop, Uptown, and other North Side Areas. But our mission remains unchanged: To provide original public safety reporting with better context and greater detail than mainstream media outlets.
Website Facebook Twitter YouTube

17-year-old shot man on Red Line train, paralyzing him from the waist down, prosecutors say

Man accused of firing a gun during a carjacking, then escaping from electronic monitoring, decides to argue with his bond court judge. Bad idea.