Boystown heads into this Sunday’s 49th Annual Chicago Pride Parade with an extra reason to be proud.

Just five years ago, the LGBTQ playground and adjacent Wrigleyville were in their third consecutive year of recording more robberies than any other Chicago neighborhood. This year, the Lakeview enclaves are among the city’s safest.

It’s a big turn-around, especially when you consider the attitudes held by persons in charge back when things were terrible. 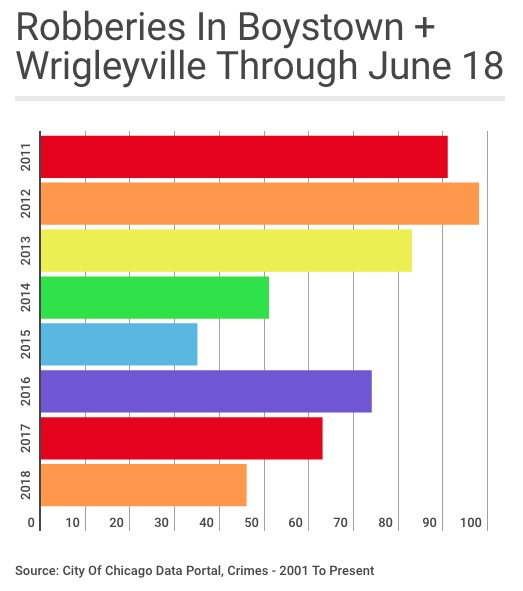 One Boystown bar owner sat in a neighborhood community policing meeting in 2011 and announced that his staff had begun to offer customers personal escorts home. “We had a Fantasyland here,” he told the meeting. “We’re never going to get that back.”

The local police commander whistled Dixie: “The crime rate has been fairly steady and kind of on a downward trend for the past several years,” she said.

And local Alderman Tom Tunney’s office was calling the problem “more of a perception issue than it is an actual crime issue.” Wrigleyville and Boystown would record the most robberies in at least a decade that year. A new record would be set the next year. And a third record would be set in the year after that. As recently as 2013, Tunney stated publicly that he had no idea that Boystown and Wrigleyville led the city in robbery reports.

Thankfully, some local residents didn’t accept the “no more Fantasyland” or “perception” answers.

Those rankings come directly from the Chicago Police Department.

What does that mean in raw numbers?

Well, Wrigleyville and Boystown has recorded 46 robberies so far this year. That’s down from 63 at the same time last year. By comparison, about twice as many robberies had been reported in the neighborhood by the time the Pride Parade arrived in 2011 and 2012. 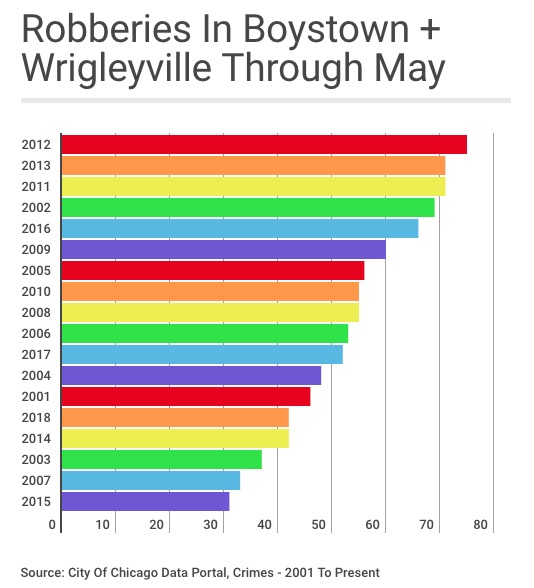 It’s difficult to look at partial-month stats before 2011 because a police department re-districting changed beat and district borders. But full-month stats are available going back to 2001.

How are Boystown and Wrigleyville shaping up this year?

So far, 2018 is tied for the fourth best-start to any year since 2001. (It tied with 2014, the year that the police department finally decided to get serious about the robbery problem.)

It feels great to see such incredible results—especially when it seemed like the people in charge of public safety once seemed more concerned with denial and diversion than planning and improvement.

Cheers, Boystown. We’re proud of you.