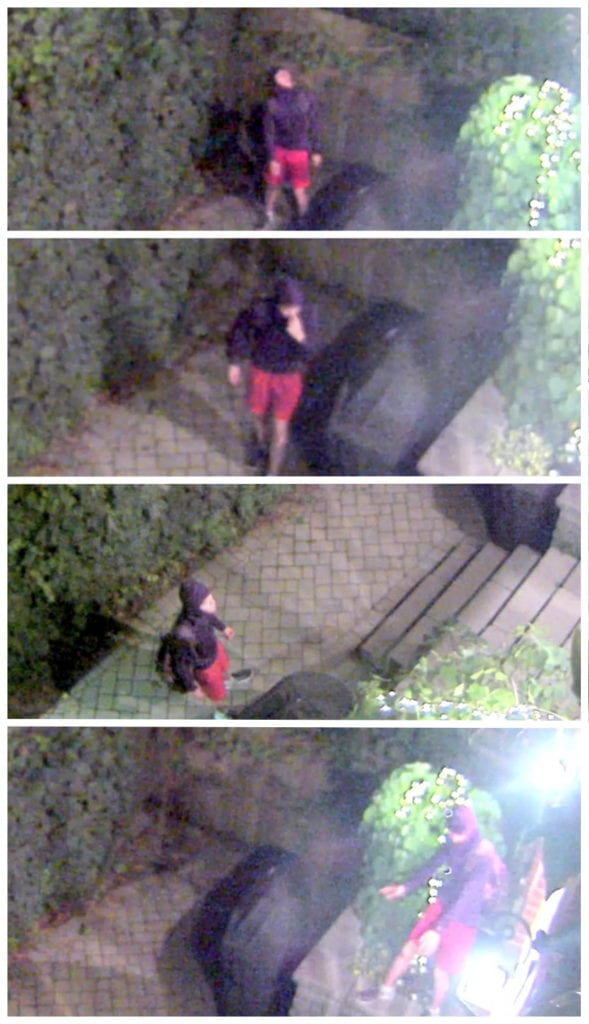 A family that lives near Halsted and Diversey found an unpleasant surprise on their home surveillance system Wednesday: footage of a man who spent “a solid twenty minutes” trying to break into their home overnight.

We’re sharing a few of the images here.

The homeowner, who asked not to be identified by name, said police think they know who the man is. “It’s a guy who just got out of jail for the same thing,” he said.

“He is clearly a pro. The video shows him wearing a ski mask and backpack.”

On the positive side, the prowler failed to get into the family’s home.

A few burglars who got caught in our area have recently wrapped up their court cases with guilty pleas. Here’s a look at how the justice system treated them:

• A man who broke into a Boystown resident’s home while the victim was sleeping last December has been sentenced to five years for residential burglary by Judge Timothy Chambers. His parole date has not been set.

In 2015, Grant received 30-months probation for mugging a 25-year-old man in Wrigleyville.

Keshana Jarret and Carlos Ortiz were both 19-years-old when they burglarized the ice cream shop after hours on two nights last July. Surveillance video allegedly showed Ortiz working as look-out while Jarrett jumped the counter and retrieved the store’s money bags from a back office. Police declined to say how much money was taken, but said the total was “equal to all of the cash taken in” on the two days. Weather records show that temperatures were in the 90’s on both days.

• He’s not a burglar, but he is an interesting shoplifter. Mario Weekly, 34, was sentenced to 202 days time served after pleading guilty to stealing $1,411 worth of Mucinex from the State Street Target store last November. Police said he was carrying a large bundle of stolen mail when they caught up with him. Weekly has a long history of theft arrests. Judge Maura Slattery-Boyle approved his latest plea agreement.