Town Hall District police made two burglary arrests in three hours overnight—one in Lakeview and another in Uptown. Charges are pending in both cases.

Around 10:30 p.m. Saturday, an Uptown man reported that someone was trying to break into his home in the 4700 block of North Dover. Police found damage to the home’s front door and fingerprints on a window that the burglar tried to access, according to a report. Officers found the suspect nearby and took him into custody.

Then, around 1:45 a.m. on Sunday, a woman called 911 to report that a man she did not know was inside her home in the 4000 block of North Clark Street. The offender was gone when police arrived. About 15 minutes later, though, a homeowner flagged down police a couple of blocks away to report that a man was trying to break into a building in the 1400 block of West Cullom. The man was detained and the woman who called police a few minutes earlier was able to identify him as the prowler who was inside her home, police said.

CWBChicago will publish an update on both of these arrests when charges are finalized. 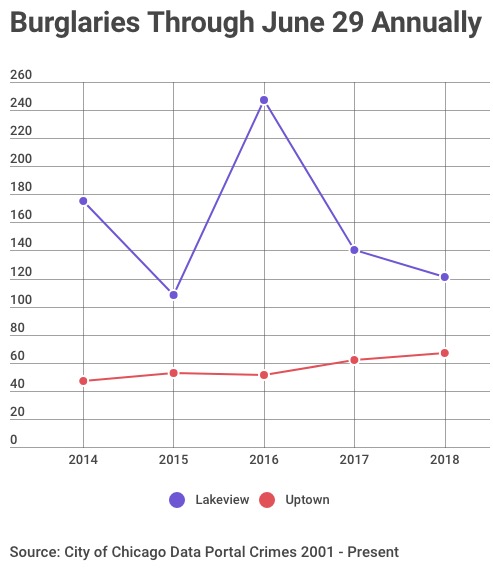 Summer is peak season for burglars as windows and doors are often left open to allow cooling breezes into homes, making their job a lot easier.

Uptown has seen a gradual increase in robberies over the past five years. With 2018 recording about 50% more cases year-to-date than 2014.

• Lock your doors and windows, even when you are home
• Secure window unit air conditioners so they cannot be pushed in from the outside
• Lock rear gates from the inside.
• Make your home look “lived in” by leaving a TV on when you are away.
• Close blinds and curtains; do not leave any valuables of any kind visible from the outside