Despite all of the media hype about Chicago adding hundreds of new police officers, manpower in the 19th (Town Hall) District slipped again in June. And Town Hall police work schedules, provided to CWBChicago by a source, show that the district is sometimes operating with no cars assigned to as many as six of its fifteen beats.

The district is also going into “Radio Assignments Pending” (RAP) status far more often than in recent years.  RAP status means that all of a district’s on-duty officers are tied up on assignments and no cops are available to handle incoming calls for help. Dispatchers stack up requests for help during RAPS. When an officer becomes available, they are dispatched to handle the most pressing pending matter.

First things first: New manpower numbers released by the Chicago Police Department show that the 19th District shed thirteen officers in June, dropping to a strength of 372 officers. The district is operating with 20% fewer officers than when it was formed by merging two smaller districts in 2011.

In February, Ald. Tom Tunney (44th) told the Sun-Times that Chicago Police Superintendent Eddie Johnson had promised “more resources by May. … He has made a private commitment to me that I will be happy with the number.”

In the same report, police department spokesman Anthony Guglielmi said CPD would get Town Hall manpower “back to levels prior to when those two districts merged.”

But no matter how many graduation ceremonies Chicagoans have seen, the number of cops assigned to Town Hall is actually slightly lower than when the hiring surge began.

Tunney, in a newsletter to constituents late last week, sounded anything but “happy” with Town’s Hall’s staffing level.

“We are awaiting an action plan from the Superintendent on how promised increases will be met,” Tunney said, “and [I] will share that update when it is received.”

A recent Town Hall District schedule shows that the district has been operating at times with cars assigned to only a fraction of its 15 patrol areas, also known as “beats.” The schedule was provided by a source who requested anonymity because they are not permitted to speak about departmental affairs.

Last Thursday, four of the 15 cars were out of commission on the evening shift. Friday evening? Five of fifteen down. Saturday and Sunday evenings both had four “down cars.”

During pre-shift roll calls, Town Hall officers have been told to “pick up the slack” for the non-operating beat cars by handling calls quickly, the source said.

Of course, a sprawling police district will run into trouble if a quarter to a third of its beat cars aren’t operating. Calls for help will out-strip available resources. And when that happens, a “RAP” is declared.

We reported in March that calls for police service in the Town Hall District last year grew into “RAPS” 239 times, according to city data. By comparison, in the 56 months between January 2011 and August 2015, the district had a total of 167 backlogs.

Backlogs, also known as “Radio Assignments Pending” status or RAPs, are declared when no police units are available to handle incoming 911 calls for service. They are a good measure of whether a district has enough manpower to merely handle incoming requests for help. During RAPs, dispatchers assign the most pressing issue to the first unit that becomes available, the other calls wait their turn. 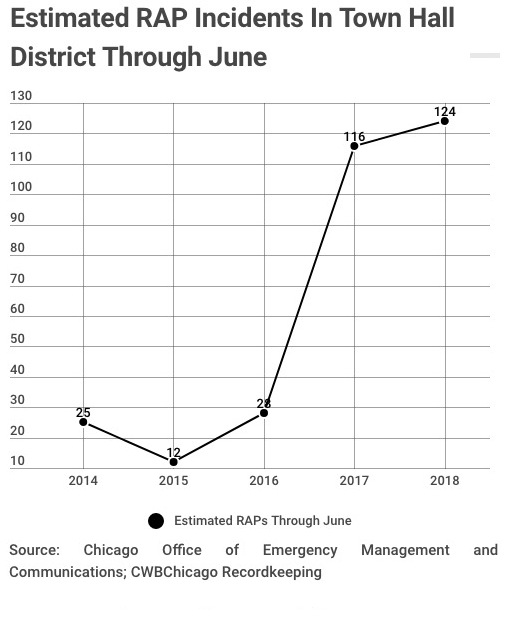 As recently as 2015, Town Hall recorded relatively few RAPS compared to other districts, according to a report by the Chicago Sun-Times.

The paper’s report found that between January 2011 and August 2015, Town Hall recorded 234 backlogs. Compare that to 239 last year alone. Breaking it down, Town Hall averaged just over four RAPs per month during the Sun-Times study. Last year, the district averaged almost twenty.

On May 1, our team filed a Freedom of Information Act request seeking an update on the number of officers assigned to the police department’s districts and units. We also asked for information about where the department’s newly-minted probationary police officers are being assigned. CPD has failed to respond. The Illinois Attorney General’s office is now pursuing the matter.

On Monday afternoon, the police department announced that “well over 1,500 additional officers will be deployed through the upcoming holiday and weekend.”

We asked the department’s media team to explain what “additional” means. The Chicago Police department does not have a reserve corps, so it’s impossible for CPD to independently drum up “additional” police officers. Does that mean 1,500 overtime shifts are going to be worked by Chicago cops, thus making it 1,500 “additional” shifts? Are 1,500 law enforcement officers who usually don’t work in Chicago being brought in? Are the 1,500 “additional” officers a 24/7 force or is that spread over the course of five or six days?

We did not receive a response.