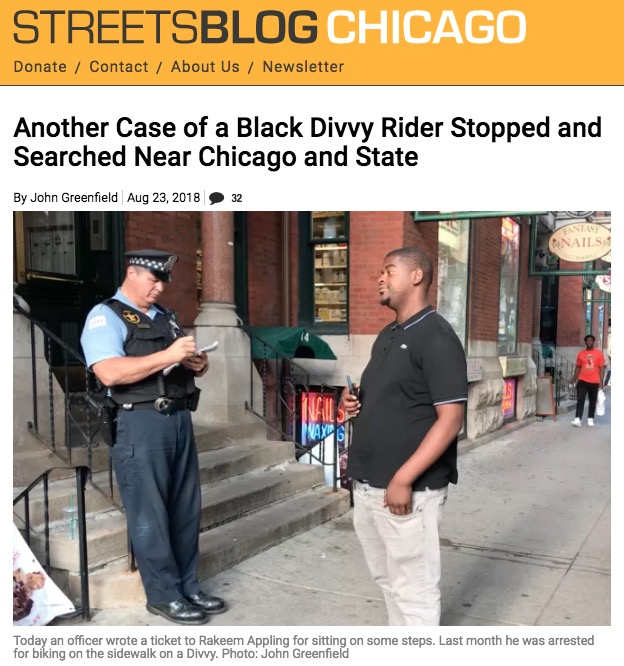 “Another Case of a Black Divvy Rider Stopped and Searched Near Chicago and State.”

From the headline and the accompanying picture of a black man being issued a ticket by a police officer, you might think that cops had picked some random black man for harassment.

It turns out that the “Black Divvy rider” isn’t some random person on the street. He is very well known to cops, residents, and businesses around Chicago and State. And he isn’t just a “Divvy rider.” He actually pleaded guilty to theft of a Divvy bike. But, first things first.

Since news broke of failed locking mechanisms on Divvy’s docking stations, we’ve consulted with Streetsblog from time-to-time. They know their beat well. Likewise, they’ve checked in with us on some things related to the Divvy story.

Thursday evening, Streetsblog editor John Greenfield sent us a message asking if we had information in our database of Divvy theft-related arrests about a guy named Hakeem Appling.

We do: He was arrested on July 11th at 24 East Chicago for possessing a stolen Divvy bike. He subsequently pleaded guilty and was sentenced to two days time served.

While we didn’t know what Greenfield’s story was going to be (and we do know better than to ask a reporter what they’re working on), we had a hunch that he was preparing to write that Appling had been unfairly targeted by police. So, we offered some details “on background.” That means we stand by the information but it’s not for attribution to us.  Sources provide information on background for a variety of reasons including ours: To suggest additional routes of exploration for a reporter.

“Appling is well-known to the police in the 18th district,” we told Greenfield, “and especially as a troublemaker at State and Chicago” where he was arrested in the Divvy theft case. “He is not well liked by the merchants and residents in that area,” we added.

Despite our heads up, Greenfield didn’t ask about Appling’s criminal background nor did he explore the possibility that police knew precisely who Appling was when they stopped him for riding his (stolen) Divvy on the sidewalk in July.

So, if you have a few minutes, we’ll take this opportunity to tell you a few things that are missing from the Streetsblog story.

The first thing to know about the intersection of State Street and Chicago Avenue is that the surrounding area is designated by the city as a crime “hot zone.” Those zones are targeted “special enforcement areas”—a designation that brings increased police presence and enforcement activity. It also allows police to disperse gang- and narcotics-related loiterers.

Officers in the 18th (Near North) District “have been working with residents and businesses to address complaints of drug sales and thefts in the area of Chicago and State,” a Chicago Police Department spokesman told us yesterday. “In response to those concerns, the 18th District has added officers on foot patrol to the area during the week and is deploying additional resources on the weekends.”

There are literally dozens of Chicago cops who spend their entire workday standing in the vicinity of Chicago and State. Among the many people they know on sight is Hakeem Appling.

Since 2011, 24-year-old Appling has been arrested two dozen times in the city. Eleven of those arrests have been within a block of State and Chicago.

Appling’s been a nuisance at State and Chicago for so long, he has been barred from the McDonald’s at 10 East Chicago for almost five years, according to information contained in criminal court files.

Here are a few of the reasons Appling has been arrested near State and Chicago:

• March 10, 2014: charged with trespassing at the McDonald’s 10 East Chicago. Charges were dropped when the manager failed to appear in court.

• March 14, 2014: The McDonald’s manager told police that when he asked Appling to leave and not come back, Appling threw a bottle of urine on him. Appling was charged with battery, criminal trespass, and possessing eleven grams of cannabis. Charges were dropped when the manager failed to appear in court.

• March 8, 2018: Tactical officers say they saw Appling drinking alcohol on the street outside of the McDonald’s. Appling allegedly ran, but was caught nearby. Police said they recovered 25 baggies of marijuana from Appling along with a bottle of Hennessey. He was charged with drinking on the public way and possession of 30 grams of cannabis. The case is ongoing.

• March 25, 2018: Appling was charged with physically threatening the McDonald’s manager at 10 East Chicago. When the manager asked Appling to leave, Appling threatened, “I will be waiting for you outside with my crew and kick your ass.” He was given 20 hours of community service.

• On July 11th, in the midst of a Divvy bike theft surge, a police sergeant saw Appling riding a Divvy on the sidewalk at 24 East Chicago. Appling was stopped. Officers ticketed him and, after learning that his Divvy bike had been stolen, arrested him. Appling later pleaded guilty to theft of lost or mislaid property and was sentenced to two days of time served.

For a guy who lives over a mile away in Old Town, Hakeem Appling sure does get into a lot of trouble at State and Chicago. And behavior such as allegedly carrying 25 bags of marijuana may cause him to attract more “hot zone” attention than an ordinary passer-by.

Besides Appling’s relevant arrest record and long-term high-profile behavior at State and Chicago, some other details are missing from the Streetsblog story about Appling:

“When I got to the stretch of Chicago Avenue where Saturday’s arrest [of another black man who was riding a stolen Divvy bike] took place, there were several officers stationed by the Red Line entrance, near a McDonald’s…”

• The large police presence is a direct result of the State/Chicago area being designated a “hot zone.” These are the officers who spend their entire day doing nothing but patroling the area around that intersection.

“…and a couple [other officers] were walking towards a Starbucks at 42 East Chicago. It wasn’t long before I witnessed them issuing another young Black man a ticket.”

• According to police dispatch records, a Starbucks worker called 911 because “a known drug dealer” in “a black polo shirt” was sitting on their front steps. Again, this is happening in a “hot zone” where narcotics sales are a top concern of local residents, according to Chicago police. The man in the “black polo shirt” identified as “a known drug dealer” by locals but by Streetblog as “another young Black man [getting] a ticket” was Hakeem Appling.

“Appling told me no one had asked him to move or warned him that the police had been called before the officers ticketed him.”

• Perhaps the Starbucks employee who called in the drug dealer on their front steps has received a warning similar to the one Appling gave the nearby McDonald’s manager: “I will be waiting for you outside with my crew and kick your ass.”  Maybe a bottle of urine has been involved? As a resident of the State/Chicago area told us today, “They ask Hakeem repeatedly every day to leave local Chicago Avenue businesses up and down the street. He’s not a good listener.”

• When a man who is very well known to local police, residents, and busineses as a troublemaker suddenly acquires a Divvy bike in the midst of a Divvy bike theft surge—and then rides it down the sidewalk—it is not “racial profiling” when police stop him. It’s common sense.

When cops anywhere in the city see one of their “regulars” suddenly in possession of a Divvy bike, it only makes sense for them to inquire about the bike’s origins. And if the “regular” is riding a bike on the sidewalk, or in violation of the rules of the road, that makes the conversation even easier for officers to strike up.

A few days before Streetsblog bumped into Hakeem Appling at Starbucks, some news outlets picked up on a social media post that claimed another young black man who was arrested for possessing an allegedly stolen Divvy bike near Chicago and State had been racially profiled.

The man who was arrested in that case, 22-year-old Joshua Thomas, has been arrested ten times in the past three years. Four of those arrests took place in the 18th District.

But, for some reason, media outlets seem to think along the same lines as Streetsblog: If we don’t know the guy who’s been stopped by police, then the police must not know him either.