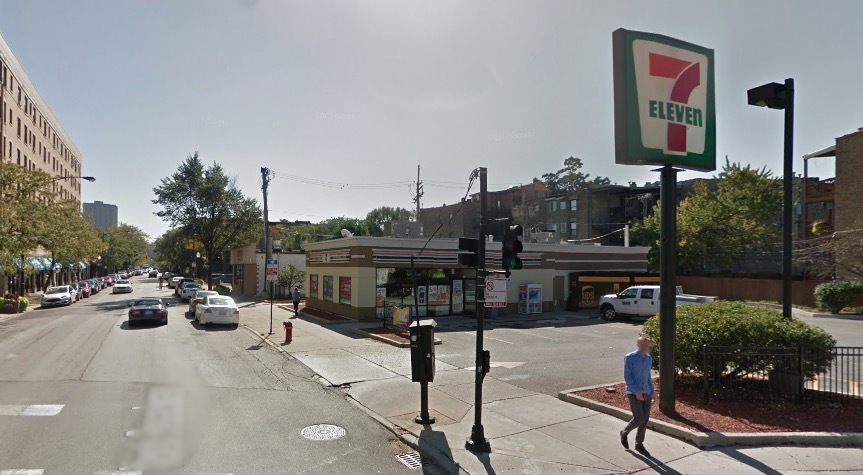 Two teenage boys, one 14 and the other 15, are charged with robbing the 7-Eleven store at 4150 North Broadway early Monday morning, police said.

The pair and a third teen entered the store around 12:30 a.m. and implied they had weapons as they collected merchandise and headed for the door. When the clerk intervened, one of the offenders punched the 30-year-old victim in the face.

Police said the clerk pursued the teens as they ran from the store, but the trio began throwing rocks at him. Some of the rocks shattered the store’s front window.

Police searched the area and made two arrests at an apartment building in the 800 block of West Buena. Those two teens are charged as juveniles with armed robbery-dangerous weapon, criminal damage to property, and aggravated battery of a merchant.

The offender who remains at large is a black male in his mid-teens who was wearing a white tank top, police said.

A CTA passenger reported that several male teenagers robbed him as he rode a northbound Red Line train at the Wilson station early Monday, police said.

The victim said the teens approached him at Wilson, took his money and iPhone by force, and then fled around 1:55 a.m. One offender was black, 15-16 years old, with short hair. He was wearing a white tank top and blue jeans. Another was also black and 15-16 years old, but he wore a black t-shirt, blue jeans, and yellow shoes, according to police.

One week earlier, another man reported that he was robbed by four offenders at the Wilson station around 1 a.m., according to police records. That victim said a group of teenagers wearing hoodies jumped him and took his iPhone before walking away. Police stopped one suspect nearby and took him into custody after the victim identified him as one of the robbers.  The teen was charged as a juvenile with robbery.

17-year-old shot man on Red Line train, paralyzing him from the waist down, prosecutors say