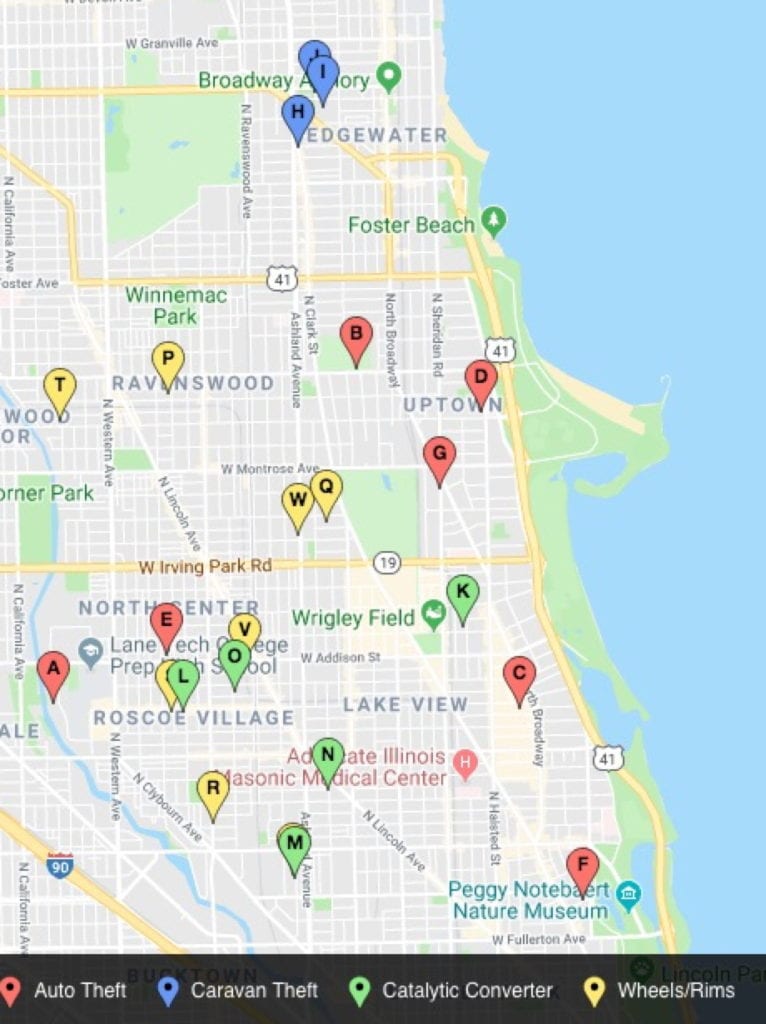 According to a series of community alerts issued by Chicago police, car thieves are targeting two specific brands on the North Side. And if you’re lucky enough not to own one of those, other police alerts warn about other thieves who are stealing car wheels and catalytic converters.

It’s enough to make you reconsider car ownership in the city.

The first alert warns that car thieves have been stealing vehicles that are legally parked in the 19th (Town Hall) Police District, which extends from Fullerton to Lawrence and the Chicago River to Lake Michigan.

“A common target for the offenders is Honda vehicles either grey or white in color,” the alert said.

Seven such cases have been reported to police since July 23, the alert said. All of the thefts took place in the evening hours, but the warning does not explain how the parked cars are being removed.

Then, another alert warned about legally parked vehicles in the 20th (Lincoln) Police District, which covers the area from Lawrence to Devon and the Chicago River to Lake Michigan.

Thieves there have been stealing Dodge Caravans, according to the alert—three of them between August 5th and 6th. The thefts took place during midday hours. Once again, there is no indication that police know how the crimes are being carried out.

A third police alert warns car owners about catalytic converter thefts from vehicles in Town Hall. “Foreign vehicles are a recurring target,” police said in the bulletin. Five catalytic converters were stolen in the district between August 8th and August 11th. Thieves saw the converters from vehicles’ undercarriages and then resell them for about $150 each, according to police.

In a fourth community alert, detectives warned residents of the Town Hall district about a series of wheel rim and tire thefts from vehicles parked on residential streets. “Honda vehicles are a recurring target,” this alert says. Again.  Eight cases between July 24th and August 14th are listed in the detectives’ warning.

Anyone with information about these cases is invited to contact Area North investigators at (312) 744-8263.